Yesterday I spent the afternoon making the 4 pairs of oven gloves which I had cut out on Wednesday. I was really happy with them all. 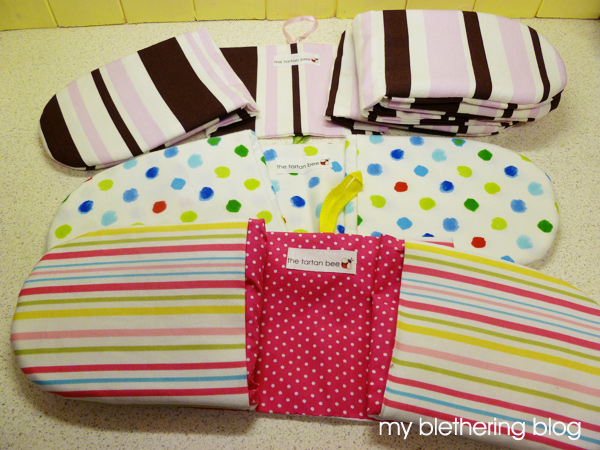 Last night I went to our last Singers' rehearsal before our Christmas break and I took along the 4 stockings I had made for our musical director which I showed in Wednesday's post here. She was - and I quote - "absolutely delighted with them - they couldn't be more perfect". Wonderful!

I had also taken along the crateful of the stuff I had in my tartan bee Etsy shop. One of the other ladies in the choir - P - had suggested that I should take the stuff to the rehearsal to let people see it as she thought they might be more inclined to buy it if they could see it and touch it.

I didn't want to appear pushy so I had left it all in the crate but P took it out of the crate and laid it all out on 2 tables along with the price list. She then announced to the choir whilst we were having our end-of-term social part of the evening that the craft table was set up and ready for viewing. She told them that I had made everything and that they should all take a look and see what they thought.

I confess that I was a wee bit embarrassed at all the praise I was given but I was DELIGHTED - yes, in capital letters - to sell 2 full length pinnies (aprons), 2 pairs of double oven gloves (both of which I had just sewn in the afternoon!), 2 diary covers with diaries and 1 patchworked zipped pouch.

At the end of the evening, I thanked P profusely for persuading me to bring the stuff along. It was a wonderful feeling to have sold so much stuff! What a great selling spree! :o)