a blouse, a topper and some placemats

There's been quite a bit of sewing going on here - as usual. Let me show you what I've been making.

First of all, I bought this blouse pattern from ebay. It cost me a whopping 39p plus £1.50 P&P which delighted me no end. 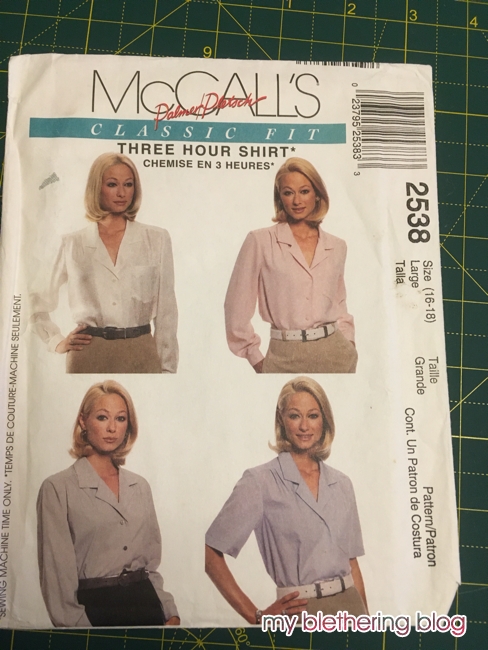 As I was about to lay the pattern pieces on my fabric, something caught my eye about the pattern. Why were the edges not a full black line? They were a dotty line. you can see that in this photo. 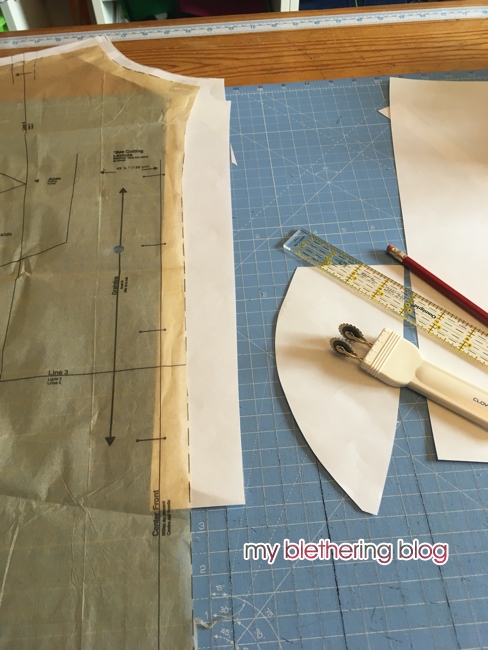 I realised that whoever had used the pattern had cut it out on the seamlines. Was the pattern too big for them and they thought that might make it the next size down? I hate to tell them, it probably wouldn't have worked. Sizing doesn't work that way! Anyway, I dug out some paper and taped it all around the edges of the pattern pieces and used my double wheel to add 1.5cm to those seamlines. I am just soooooo glad I realised what was wrong before I cut the fabric!

After all that, I got the blouse made and I have to say I am deeeeelighted with it. 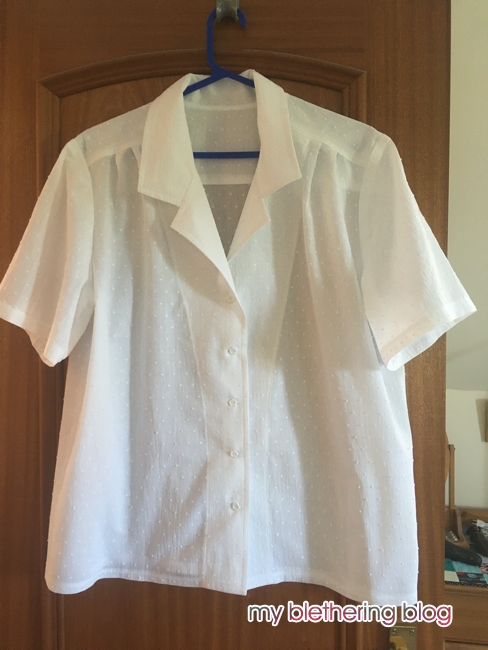 Here's a close up of the spots - they're like little tufts! 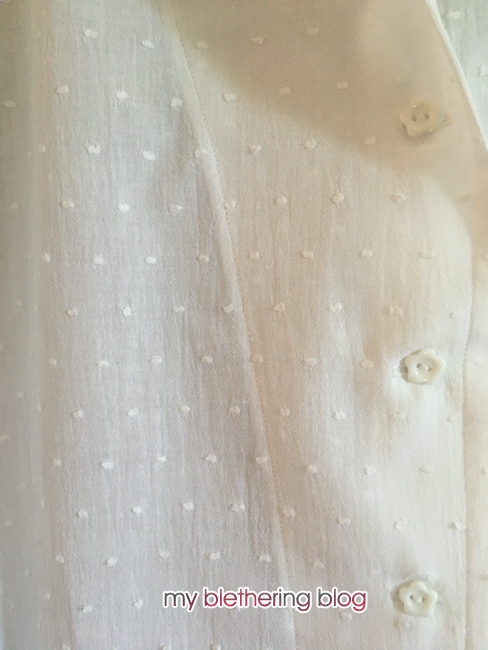 The blouse fits me beautifully and I know I will be making many more of these. So well worth the £1.89 it cost me in money and the hour or so in time to add the seam allowances back in.

Next, Joanna asked me if I'd make her a topper for her new trolley so I did. 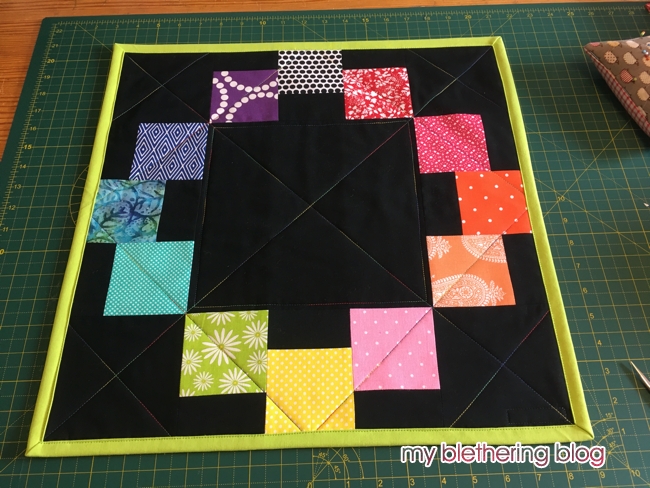 I used the same fabrics which I used in her window sill topper shown here with a couple of extras added in to get the full circle. I'm really pleased with the way this turned out although the huge black bit in the middle feels a bit bare but the quilting in the rainbow thread lightened it up a bit. And, let's face it, when it's on her trolley, it's always going to have something lying on it so the big black square won't be all that visible! 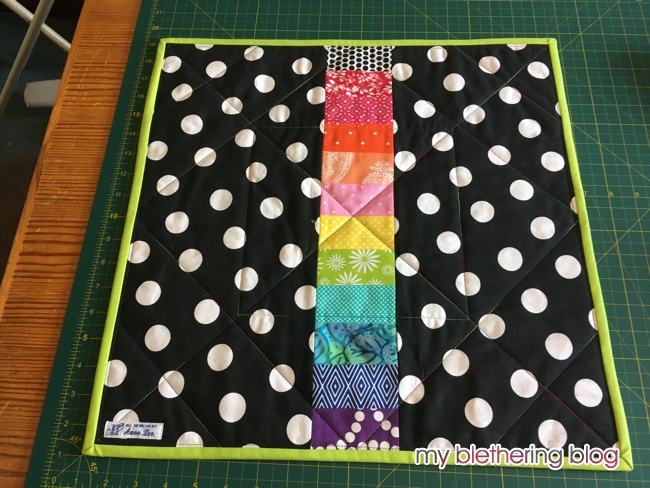 I didn't have quite enough of the black spotty fabric so decided to cut it up the middle and add in a strip of more of the rainbow colours. I like this side too!

My next "task" was to make some placemats for Debbie so I made a couple of prototypes to test out a design I'd seen on youtube. The link to the youtube tutorial is here - and the link to the free pattern is here. 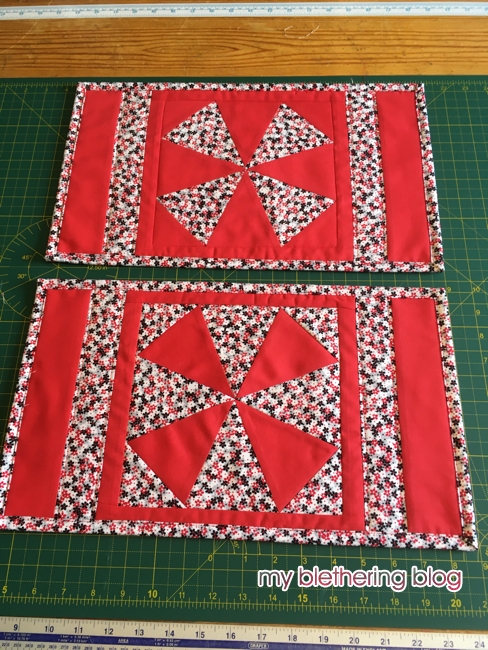 I didn't have the 45º triangle ruler that was used in the tutorial so, being a mathematician (a long time ago!!) I drew the triangle myself. It turned out smaller than the tutorial and, to be honest, the placemats are a bit small but they're okay so they'll be used (by us) for now.

When I showed the placemats to Debbie, she confessed that she liked them but didn't love them and would I mind just doing squares. To be honest, I was relieved. Squares are much easier! So, here are the 4 sets of placemats I made for her. 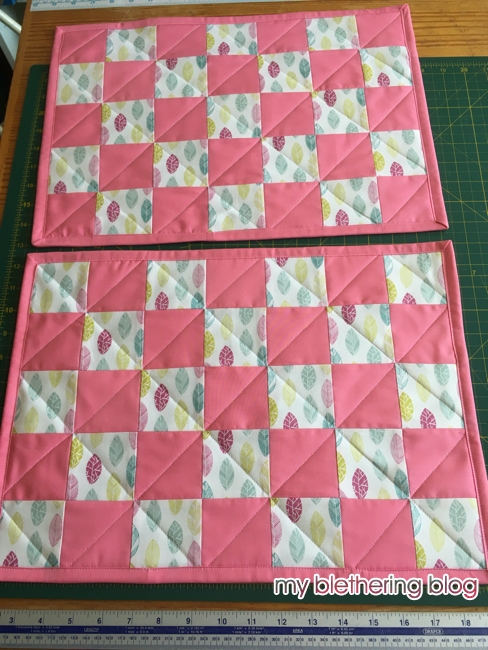 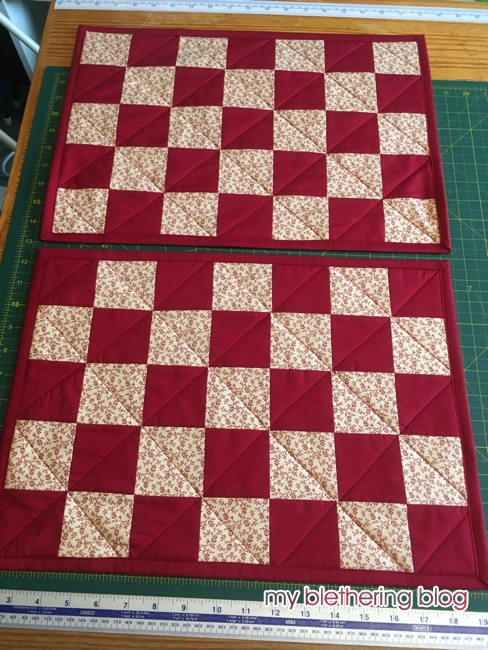 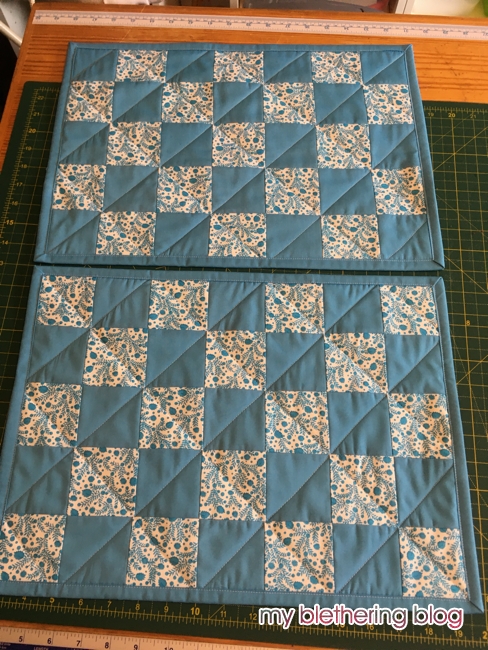 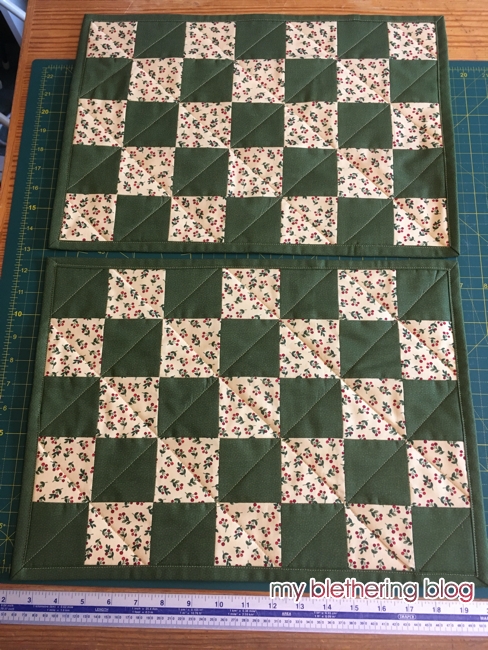 Next on the agenda is the big lion I showed the pattern for here. Originally, Debbie thought she would make it herself but I suggested I could do it to save her house becoming covered in lion fur. Hopefully I'll be able to confine the fur to my sewing room. It's funny how quickly she agreed! LOL

Stay safe out there!