When we took the tree down yesterday, we were left with a gap where the tree had been. We'd decided not to move the Clavinova back into that place as it looked fine where it was - and I couldn't be bothered moving it again!

In a moment of madness, I suggested to Douglas that maybe we could move the telly over to that space if we had something to put it on. We thought about it and discussed it and decided that we would do it. Actually, replace the "we" with "he".

So, this morning, Douglas set about doing it. Of course, moving the telly didn't just involve moving the telly. The cable box needed moved as did the MacMini, the speakers, the iPod charger and all sorts of other gubbins that I don't even know what they are or what they do!

This was the scene in the living room as he was doing all that moving - a cable explosion! 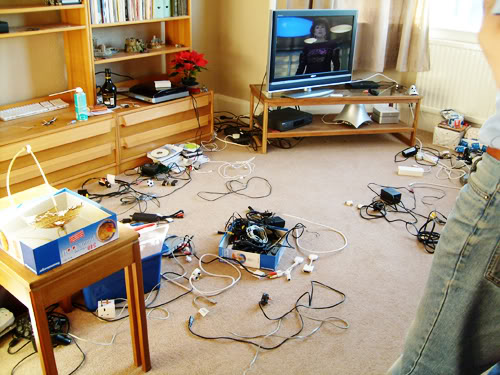