lots of sewing and an Emily catch-up

First of all, let me show you what my friend Anne from frayedattheedge sent me. Anne had asked me if I would kindly make her a sheepie like the one in this post and, of course, I said I would. In return, she sent me a cute salt and pepper set for my collection. 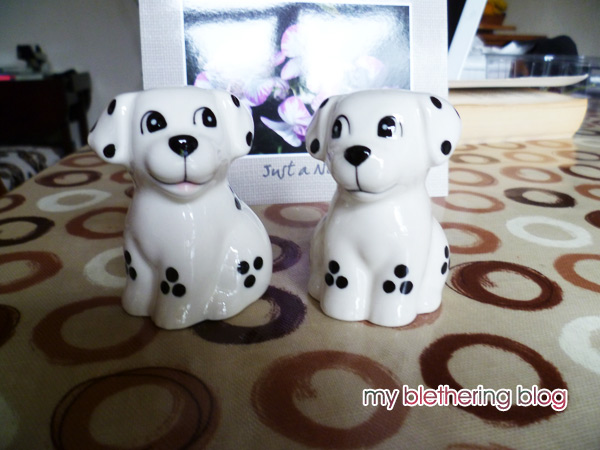 I've already thanked Anne - probably more than once! - but thanks again, Anne. I really love them! :o)

I've done quite a bit of sewing recently. First, a top for myself. This is the pattern I used - Butterick 6024, view D. 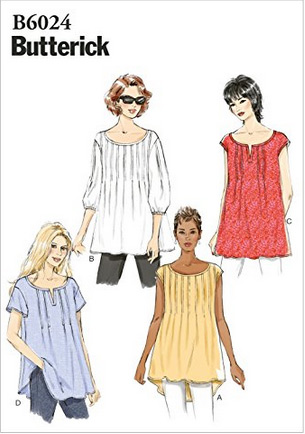 I didn't do the opening at the front neck - I thought it might end up a wee bit low on me so just missed it out! Here's my version of it: 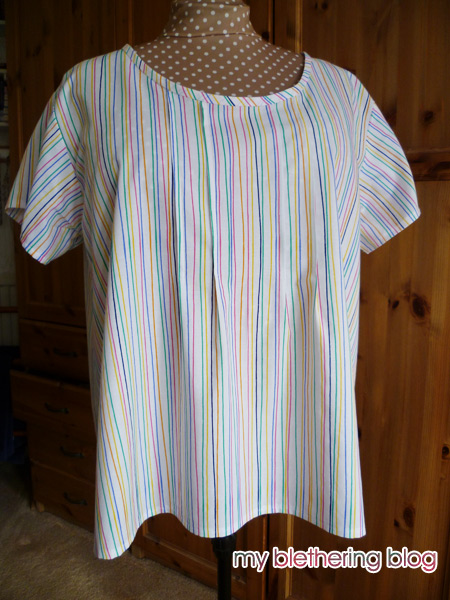 I used a stripey sheet from Asda's. I think I paid £7 for the sheet which gave me more than 2 metres x 2 metres of fabric. Bargain!

Next I made some rompers for Miss Emily using this pattern - Simplicity 1447, view C. 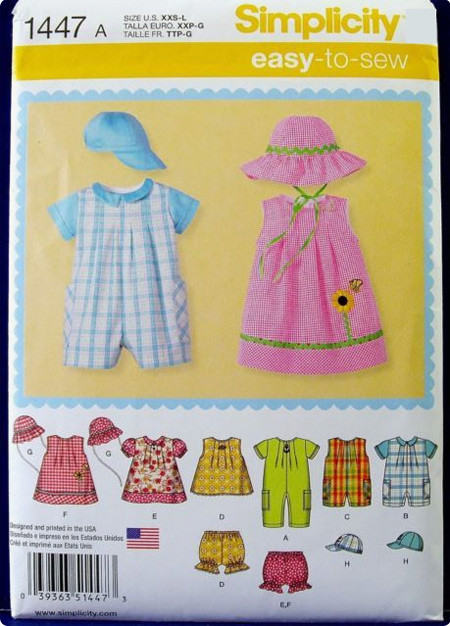 I used a remnant which I'd paid £3 for. Another bargain! 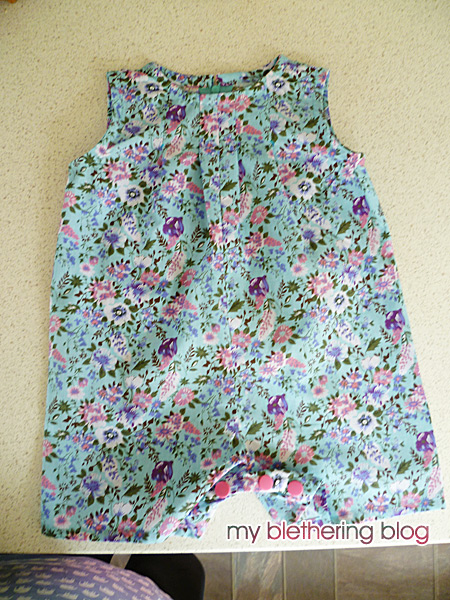 Next I sewed her a wee dress using Butterick 5017, view D. 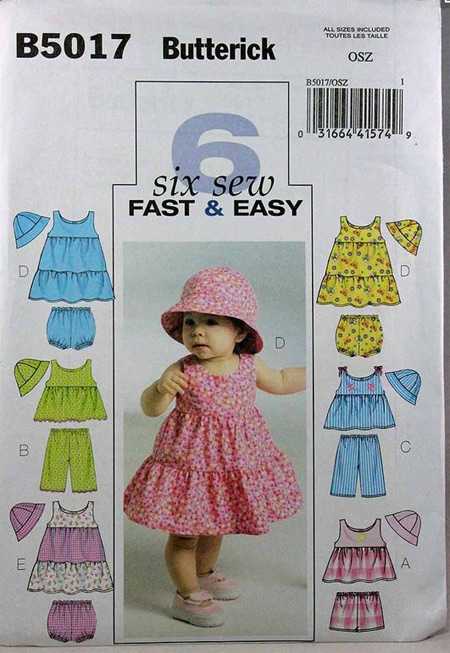 This was another remnant which also cost £3. Yet another bargain! 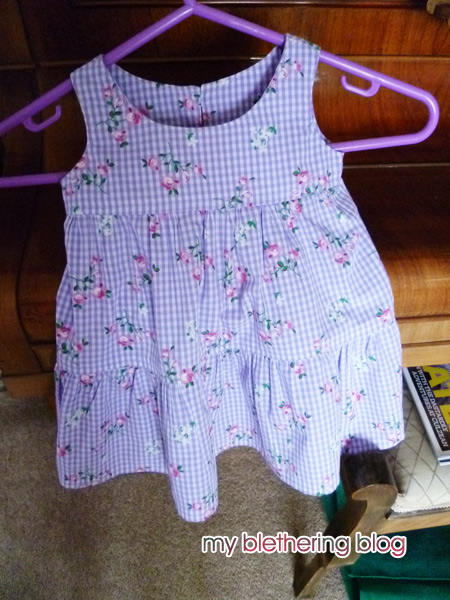 I've also made the matching panties but I'm waiting for Debbie to measure Emily's waist and thighs so I can put the elastic in. I'll take a photo when they're elasticated.

This was my best bargain of the week - yes, even better than the ones I've already shown you. This was the piece of fleece left from the quilt I made last week. I straightened up the edges, cut off the selvedges and cut fringes on both ends. A free scarf! 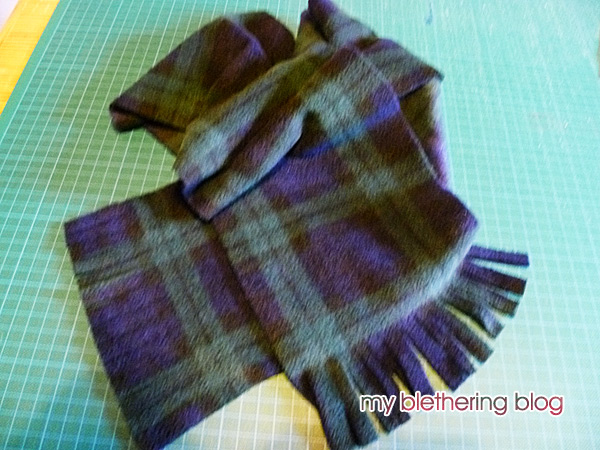 Now a few photos of Emily to show you how big she is. Debbie took this one last week. She's not crawling but she wants to! 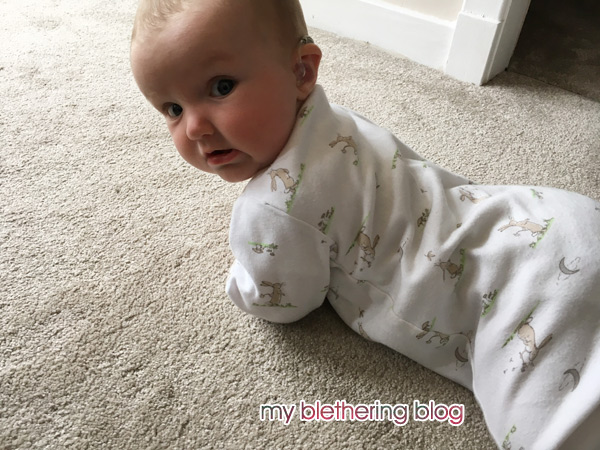 When we went to see them last weekend, Joanna and Emily chose Emily's hallowe'en outfit. Or at least the hat and shoes! LOL 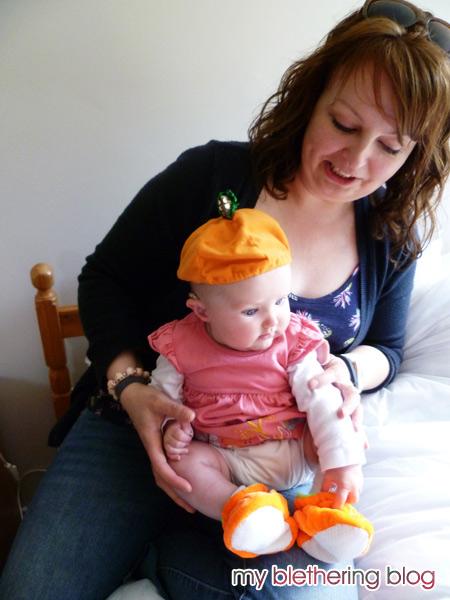 Last one for now, Debbie sent this tonight. Emily holding tight to Mr Bunnykins. So cute! 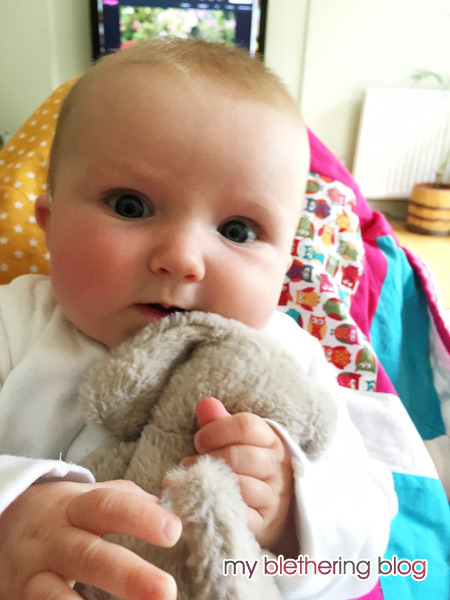 You may have noticed in the "crawling" photo that Emily has a hearing aid in her ear. She's actually got them in both ears. Her hearing was tested twice when she was a few days old and she failed both tests. She was tested again at 3 weeks old and is hard of hearing in both ears. Basically what that means is she *can* hear but not as well as she should. It's really interesting to see her noticing things now that she didn't before. She always heard Molly barking but now she can hear Molly's toenails clicking on the wooden floors. She always heard loud noises but now scares herself when she hiccups! LOL

Naturally, we'd rather she didn't need the hearing aids but we realise how lucky she is to have been caught so early and to have hearing aids fitted at 3 months old is just incredible. I was talking recently to a primary school teacher and she told me that some children started school without having been tested. How much harder would it be to start wearing hearing aids at 5 years old? Yep, Miss Emily is a lucky wee girl!