I've been nominated by my blogging friend Jo from throughthekeyhole for the Liebster blog award. Thanks, Jo! 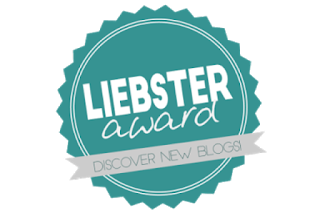 1. What was the last film you saw at the cinema?
We went to see the newest Star Wars film. I was a bit worried about it as I didn't like the second batch of Star Wars films (the ones that supposedly told the story before the original films) but it was great!

2. Where would be your ideal place to live, town, country or coast?
We live in a town on the east coast of Scotland so that's 2 out of the three! We've also lived bang in the middle of the country and it had its moments! Being cut off for 2 full days due to snow (no electricity/heating) wasn't much fun, let me tell you!

3. Do you have any pets?
Not of our own. We look after Joanna's dog, Tilly, when she's at work and, at the moment, that's enough.

4. What is your favourite area of the UK?
Scotland. I am, of course, slightly biased, but, in my humble opinion, you just can't beat it!

5. What song annoys you?
"Another Brick in the Wall" by Pink Floyd. I was teaching when it came out and, regularly would walk down the school corridors at the change of classes only to hear "We don't need no education" being sung by the masses. I did try to tell my classes that the very fact that they were saying those words meant that they did indeed need an education but the double-negative explanation fell on deaf ears - or stupid ears - or both. Now, even after all the years between, I HATE that song!

6. What three things would you take to a desert island?
Sun-tan lotion, a whole library of books and Douglas.

7. If you were given a million pounds, what would you spend it on?
A big house with a huge kitchen, lots of rooms for hobbies and a garden.

8. What would be your last meal?
Roast chicken, roast potatoes, oatmeal stuffing, carrots and gravy followed by cheesecake for pudding.

9. Have you ever met anyone famous?
Douglas and I met Paul Laidlaw who appears on "Bargain Hunt" and "Flog It" and some other antiques programmes on the BBC. He is such a lovely man - and fascinating to talk to!

10. What's your favourite take away?
I don't remember when we last had a take-away! If I had to choose, it'd probably be your bog-standard fish and chips.

Now, I know I'm supposed to nominate people for this award and tell them I've nominated them but I don't do that. So, what I'm going to say is, here are 10 questions. If you feel the urge to answer them, go for it. If you don't, that's fine too!

1. What did you have for breakfast this morning?
2. When you go somewhere are you early, on time or late?
3. Do you listen to music in your car?
4. Are you left- or right-handed?
5. What colour are your eyes?
6. What shoe size are you?
7. Have you ever had an imaginary friend?
8. Do you play a musical instrument?
9. What's your current desktop picture on your computer?
10. What's your favourite Disney movie?

Thanks again for nominating me, Jo. It was fun to answer your questions - and hard to think of 10 to ask!