I was playing around yesterday with some strips and made this mat. 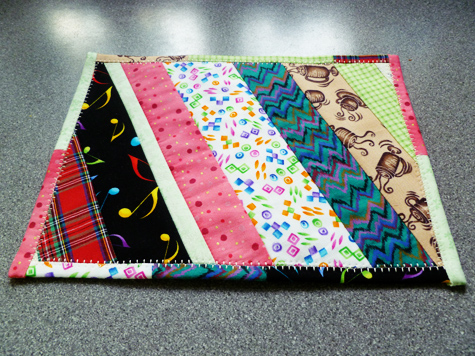 It's not big enough for a placemat or thick enough to use as a coaster unless the surface you put it on can take the heat of a mug. Douglas did point out that it's the same size as his iPad but I can't see him using it as a cover for the iPad cover! LOL

Anyway, I had fun making it, used up a few strips, learned to quilt as I go, used a fancy sewing stitch on my sewing machine and made a mess of the mitres on the corners. (No need to look for those, I unpicked the binding and made them square corners like I usually do. I am determined to learn the "easy" way of doing mitred corners though so, hopefully, the next mat will have those on it.)

I bought this bunch of daffies last Tuesday for £1. I love daffies! (Shame about the parsley plant!) 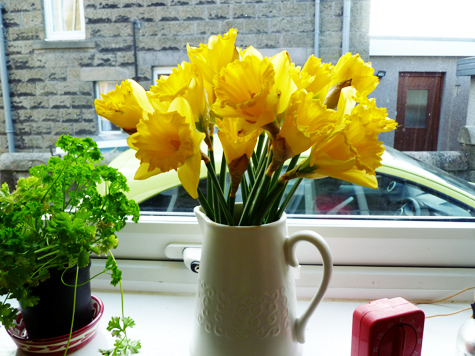 In my efforts to photograph all my recipes, I decided to take a photo of my porridge this morning. 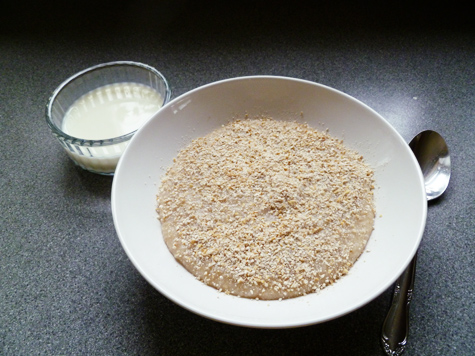 This is "proper" porridge like my Grandad used to make. When we stayed with them, I always made sure I was up early enough to help my Grandad make the porridge. I'm sure it's because of what he taught me that I've never made porridge any other way.

Put the oatmeal, salt and cold water in a pan and stir until smooth. Mix in the hot water and stir well. Bring to the boil and boil for 6 to 7 minutes stirring often so no lumps form.

Serve topped with oatmeal and with the milk in a separate wee bowl. This is so the porridge stays thick and dry and doesn't go all mushy. If you like your porridge mushy, feel free to put the milk in the same dish.