I didn't know what I wanted to make next so I used some oddments of fabrics to make bindings. I love having these already made when I make a quilt or anything else that needs bound. I made some straight and some on the bias. Aren't these fun? 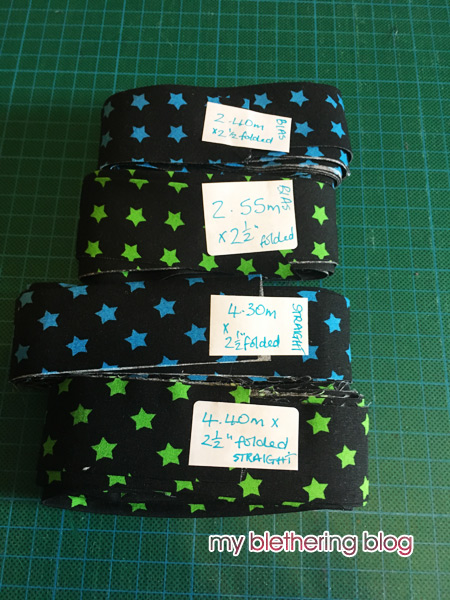 Yet again, I'm using both the metric and imperial system of measuring! LOL 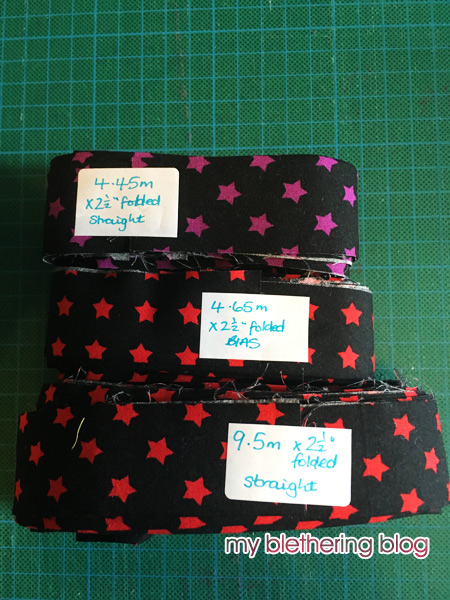 Then I decided to make Miss Emily some bibs. This one is a bit out of focus but you get the idea. 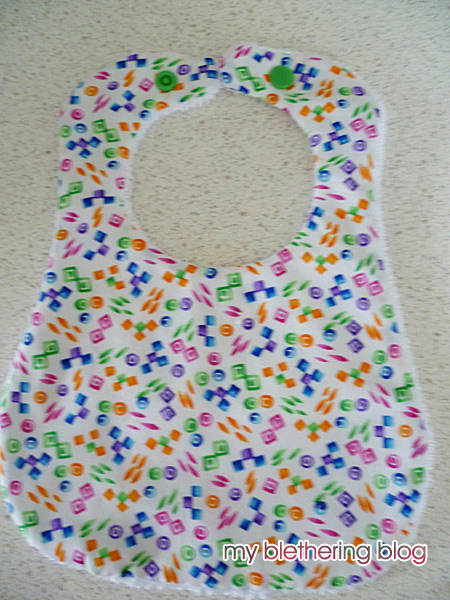 Then I took a wild notion to bind the bibs instead of sewing them right sides together and turning like I had with the one above. Remind me not to do that again - it took 3 times longer to make these ones and they're not nearly as tidy. Live and learn! 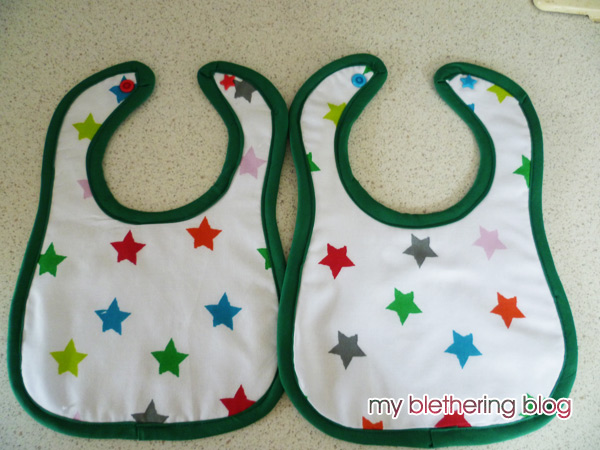 I've been thinking for a while that I could make some calico pinnies with embroideries on them for selling in the tartan bee so I worked out what I wanted to do and made a start. So far I've made 4 with plans for a few more. 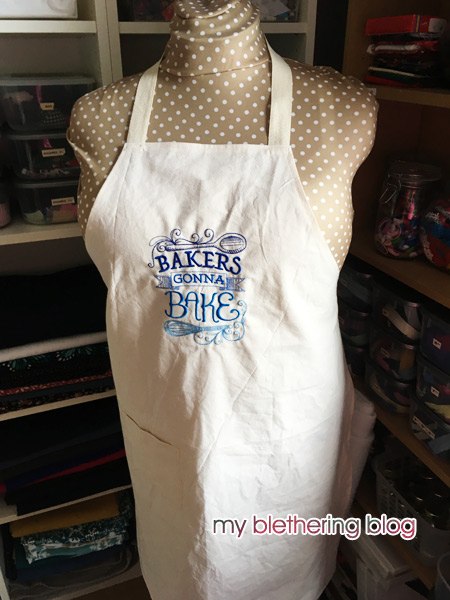 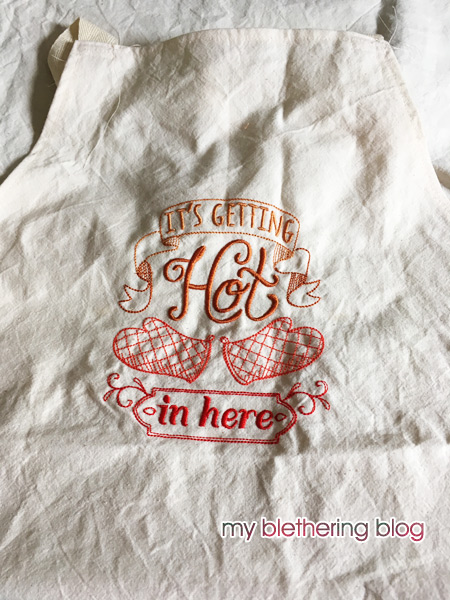 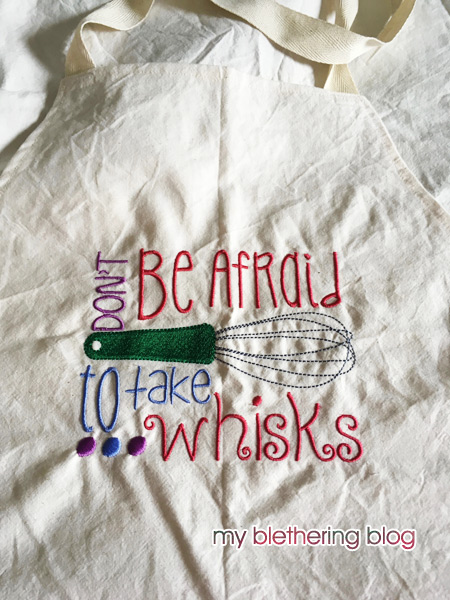 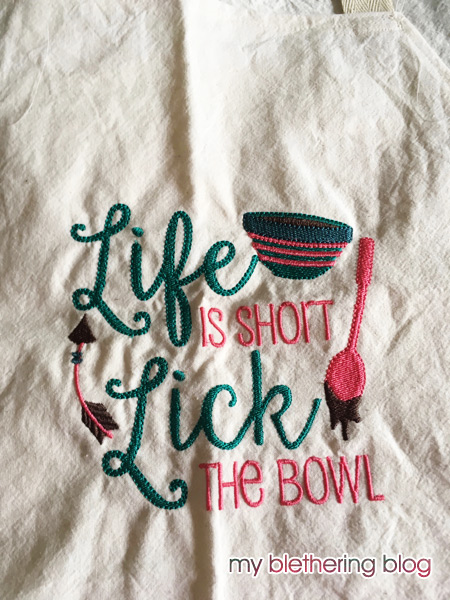 I've made myself a new bag for Singers. I didn't need a new one as the one I made last year is still perfectly good but, when I saw this embroidery, I just knew I had to make it for myself! 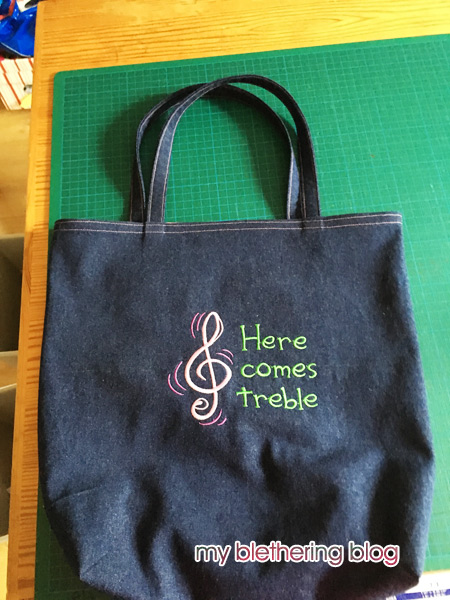 I've also embroidered another piece of calico to turn into a shopping bag. 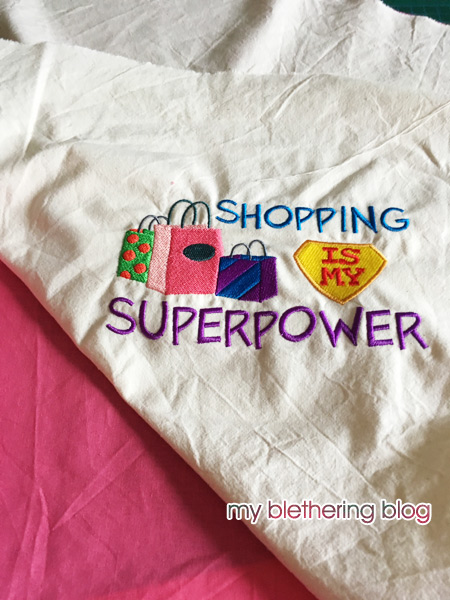 I hope to get it and the pinnies all finished off and listed in the shop soon.

And finally - Debbie sent me a photo today of Miss Emily having her first taste of carrots. I don't think she liked them much! LOL 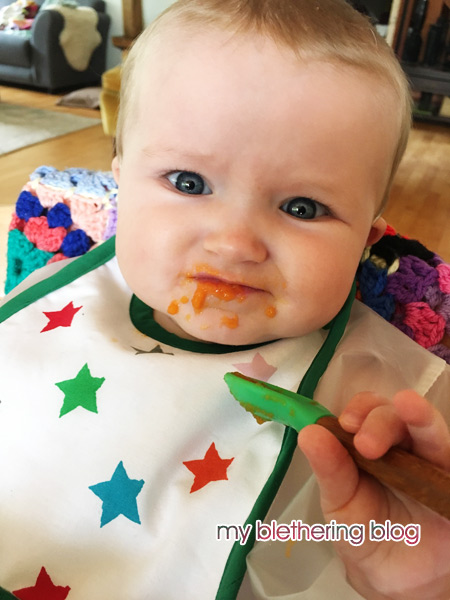 I finished the quilt I was making. I love it! 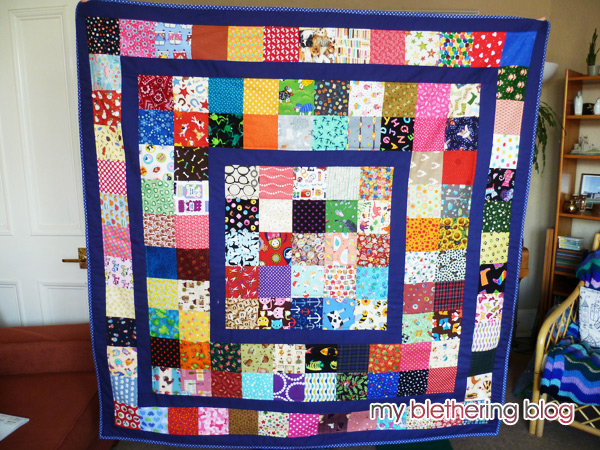 The back is a plain navy sheet. You can just see the quilting which I did in a yellow variegated thread. 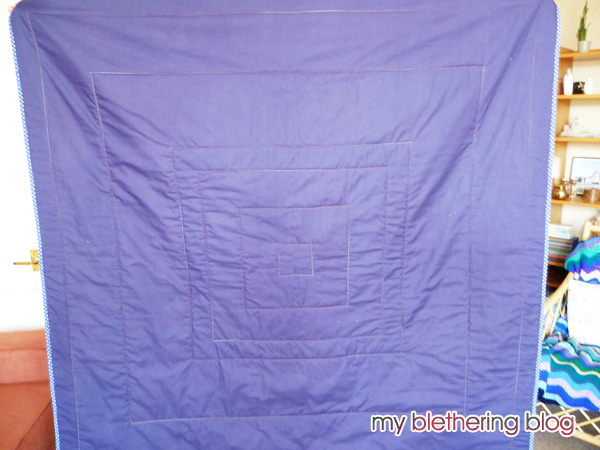 I made a couple of embroideries for Joanna. 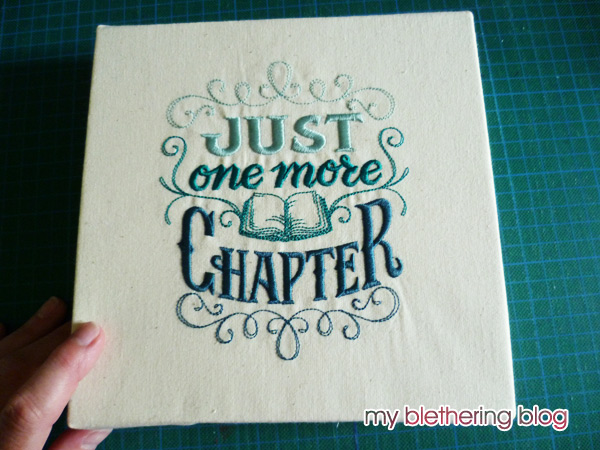 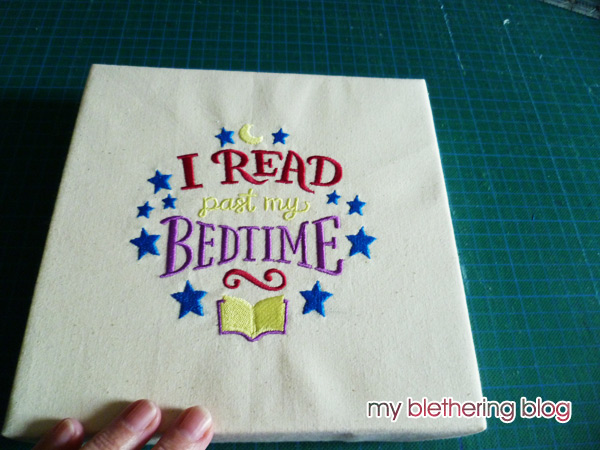 I made a couple of wee toys for Miss Emily on the embroidery machine. They're both made using the "in the hoop" method which means that everything is done in the embroidery hoop other than the stuffing and the sewing up of the last seam. This is Bailey Bear: 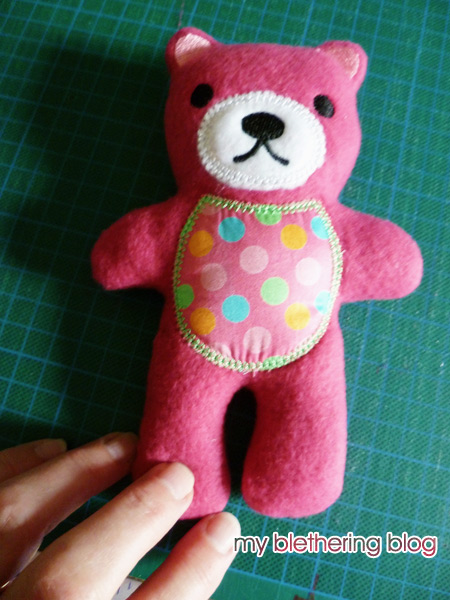 This is Olly Owl: 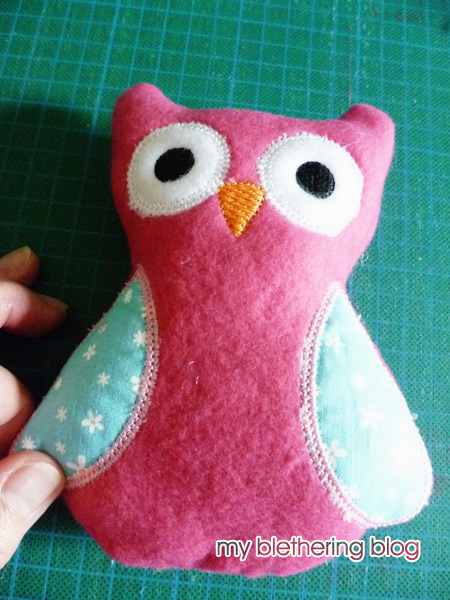 Bailey Bear is from here - and Olly Owl is from here. GGDesigns have no idea who I am - I'm just passing on the info in case someone else wants to make them.

When we visited last week, Miss Emily was given her first taste of mashed banana. 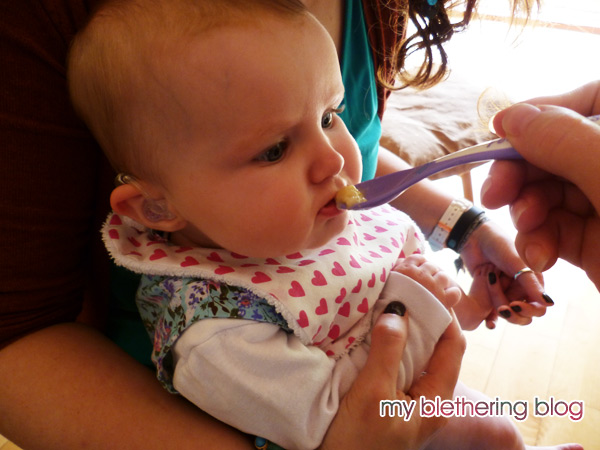 She wasn't too sure at first but soon got the hang of it. "Did you see me Grammie? I ate some banana!" 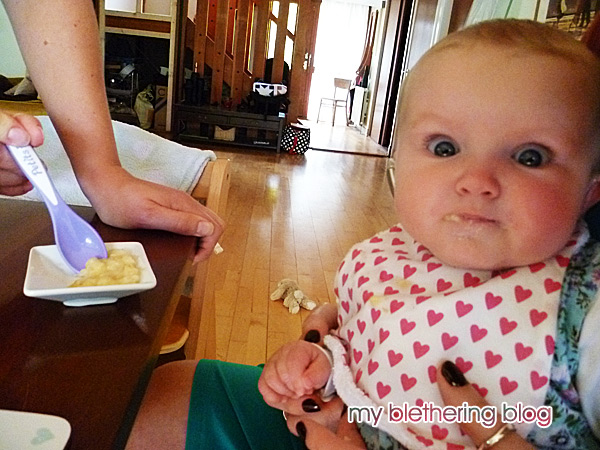 She's also nearly got the hang of sitting up on her own. Nearly but not quite there yet. I'm sure it won't be long! 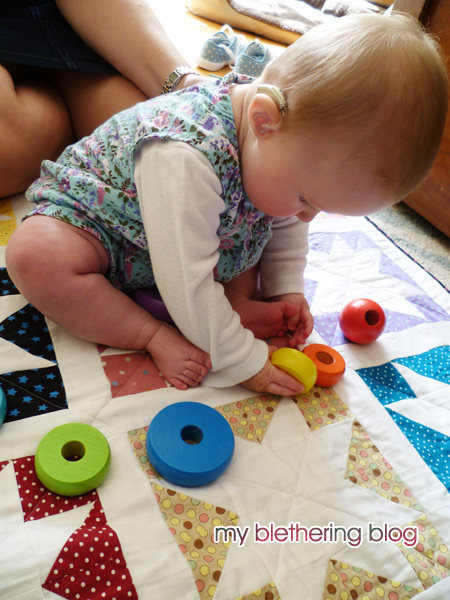 On a final note - Happy Birthday, Debbie! 37 today! How can my first born be that old??