I got into trouble yesterday when we went to see Debbie, Jason, Molly & baby bump for not blogging. Debbie told me in no uncertain terms she was fed up refreshing the page only to see the same photo of hyacinths again and again. Okay, next time you refresh, you'll see a photo of my sale jammies. Happy now? :oP

Yes, I bought some jammies in the sales - you just can't make jammies for £8 these days. Crumbs, a dressmaking pattern costs more than that! Anyway, I wore them for one night and *had* to do something about the buttons. They were so small that they kept coming out of the buttonholes - not good in this chilly weather! So, I went to replace the buttons and didn't have enough of the right size. Isn't that always the way? I have thousands of buttons - no word of a lie - and it's crazy how many times I don't have enough for what I want to do! Then I had a bit of a brainwave - why do they need to be the same? They don't! So the replacement buttons don't match and I don't care one hoot. I love these jammies. They are so comfy and cosy - especially now that they stay shut! 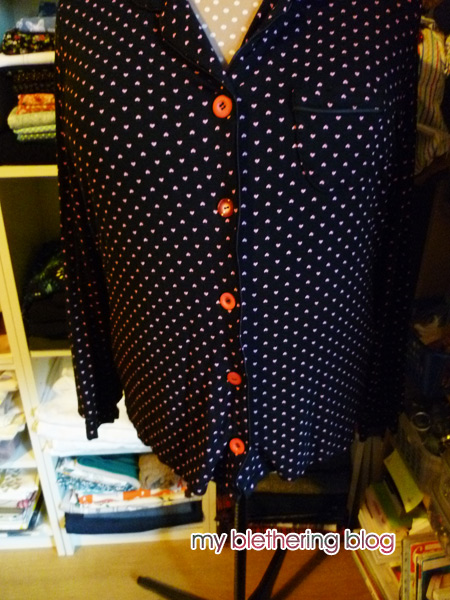 I made a couple of lemon cakes. I doubled the quantity as I had a lot of lemons to use up. They're all gone now but they were delicious! My mouth's watering just thinking about them! 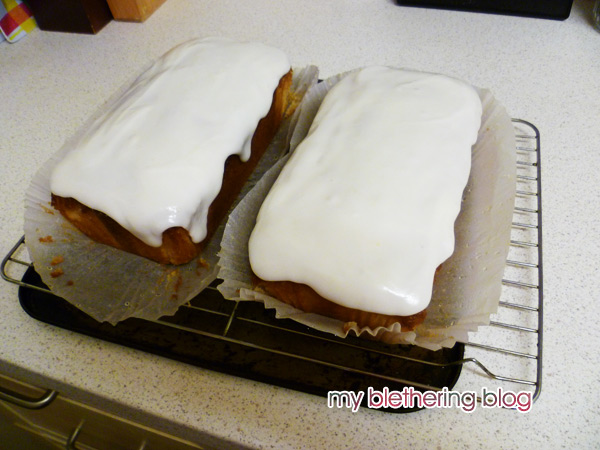 I decided to stop crocheting the ripple blankie I was making for the new baby - blogged about here. I've not ripped it out, just put it away for now. Instead I've made the same kind of blankie I made for both our girls when they were babies - your good old traditional granny squares. 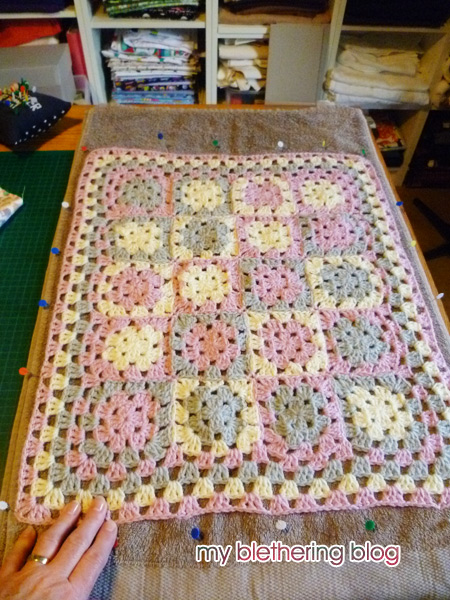 When we found out Debbie was pregnant, my next door neighbour asked me if Debbie would like a traditional shawl. Debbie was delighted at the idea and C gave it to us last week to give to Debbie. Oh. My. Goodness. It is absolutely gorgeous. What a lot of time and effort she's put into it! Debbie - having been brought up well ;o) - has already written a thank you note. She just loves it! 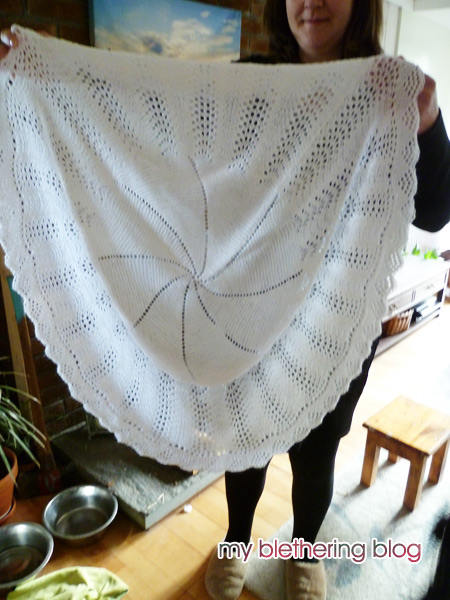 When Debbie and Jason went on holiday to Canada last year, a friend took her to the quilting shop we'd gone to in 2011 - blogged about here - and bought her fabric to make a quilt for the baby. At that time, Debbie didn't know what sex the baby was so the fabrics are non-gender-specific. I've spent the last week or so making them into a quilt top. 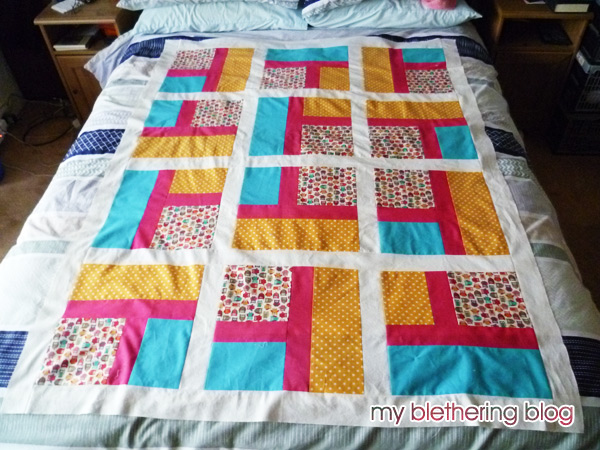 It's now pinned on to a fleece for the backing so I hope to get it quilted together this week.

One of Joanna's work colleagues was admiring her diary cover (blogged about here) and oohing and aahing and drooling over it. Maybe the last bit isn't quite true but it was a close thing! Joanna asked me if I'd make a cover for Gail. Of course, I said yes. 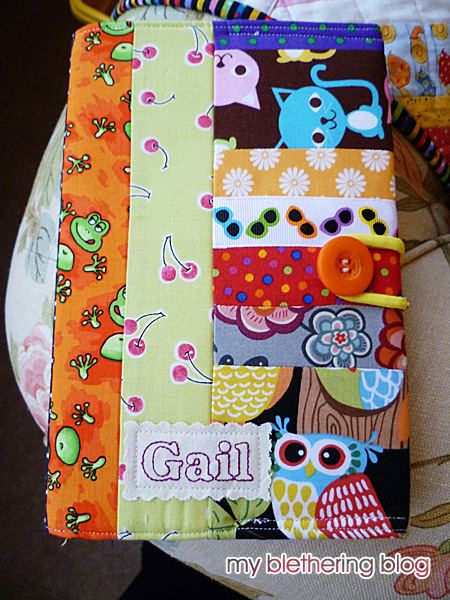 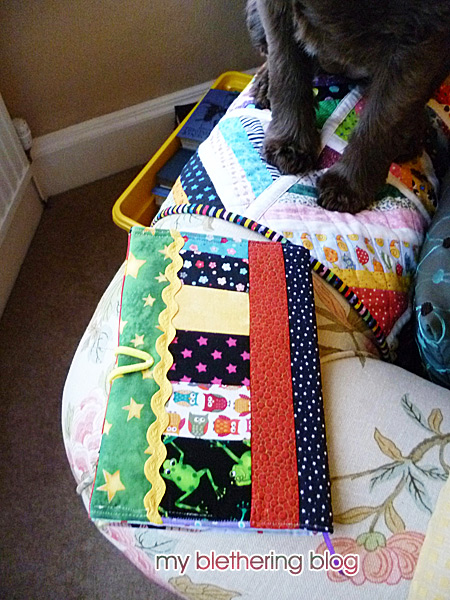 The inside front cover showing part of the quote Joanna chose: 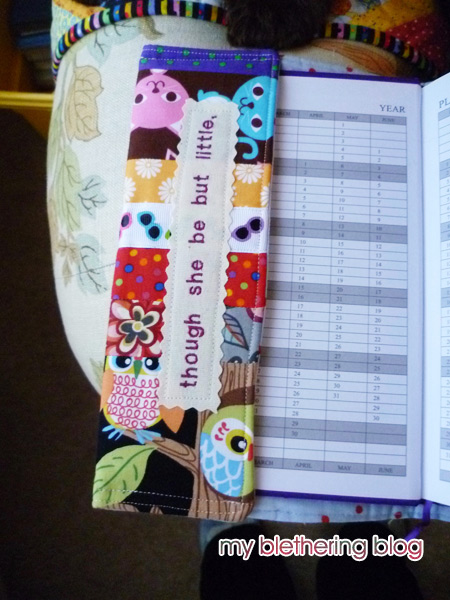 The inside back cover with the rest of the quote - I did the quote using my embroidery machine. So easy peasy! I hope Gail likes it - I'm sure she will!

You might have noticed some wee paws in the photo showing the back cover. That's because Tilly decided she wanted in on the act. Butter wouldn't melt! :o) 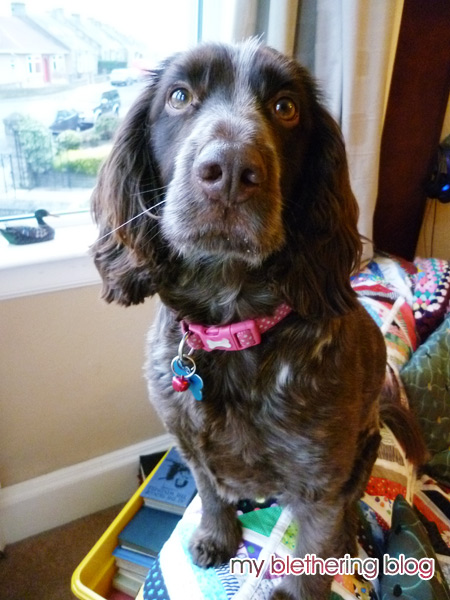