Why don't I blog more often? I ask myself this question quite a lot and I don't ever get a sensible answer from myself! The thing is, when I do blog - in today's case 12 days (!!!) after the previous blog post - I have so much to say/show that it takes ages to write the post. And who wants to read screeds and screeds of "here's what I made" posts? Not me, that's for sure! So, I'm really going to try to blog more often. We'll just have to wait and see if that happens!!

Okay, so here are some photos to show what I've been doing since I last blogged.

I finished the 2 Christmas stockings for the raffle at our concert only to get to the rehearsal last week to be told there wasn't going to be a raffle table. After a bit of (inward, small) sweary words, I just let it go. If I'd said anything, I'd probably have been roped into organising it and no way was I doing that. It should have been done weeks/months ago, not 2 weeks before the concert takes place! 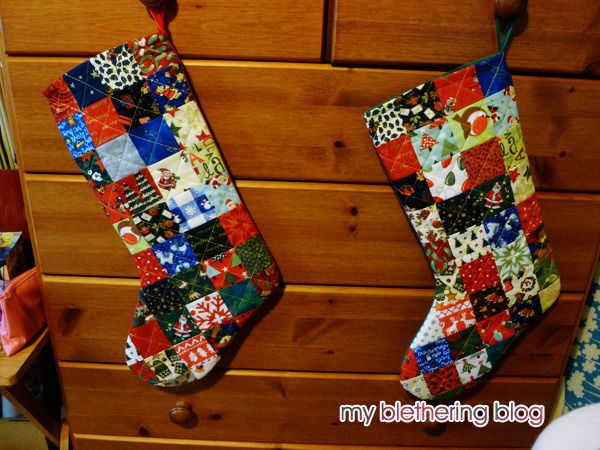 Debbie is doing a table at a craft fair on Friday so, amongst other Tartan Bee stuff, I've given her the 2 stockings. Maybe she'll sell them, maybe she won't. If she doesn't, I'll just list them in my Etsy shop.

The next thing I made were a couple of white blouses. The first one is my old standard McCall's 5359. It fits me beautifully and might well be the blouse I wear under my red jacket for the concert. 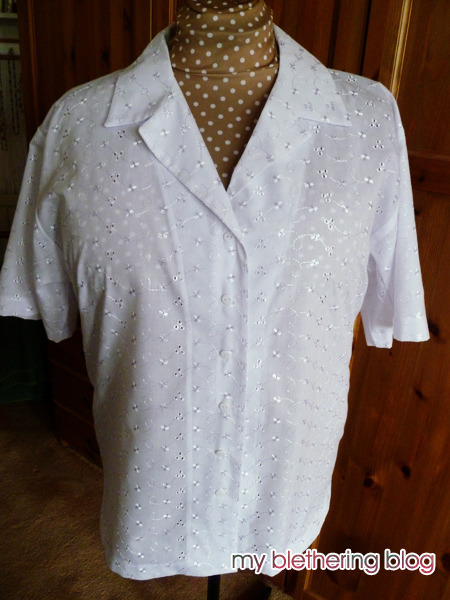 This next one is a Vogue pattern - Vogue 8747, view A. I was a bit concerned that the bust wouldn't be big enough but, when I made it up, the gathered bit is actually a bit big for me. 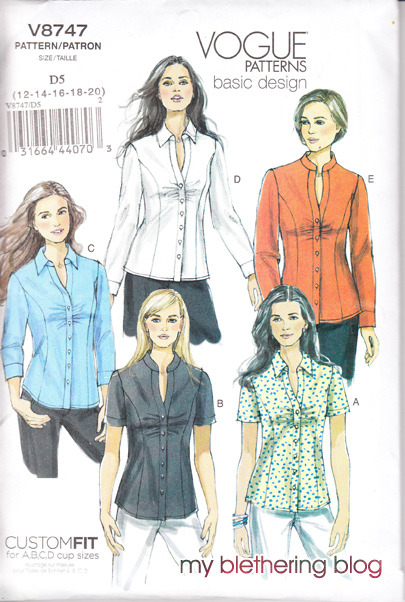 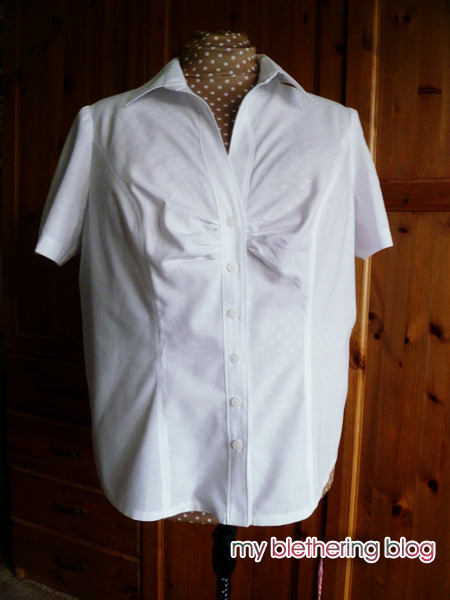 I've tried the blouse on under my red jacket and it looks fine so it's another possibility for the concert.

I made a wee tree ornament for Joanna to add to a gift she's sending to someone in the US. It's all made from scraps of tartan so appropriately Scottish! 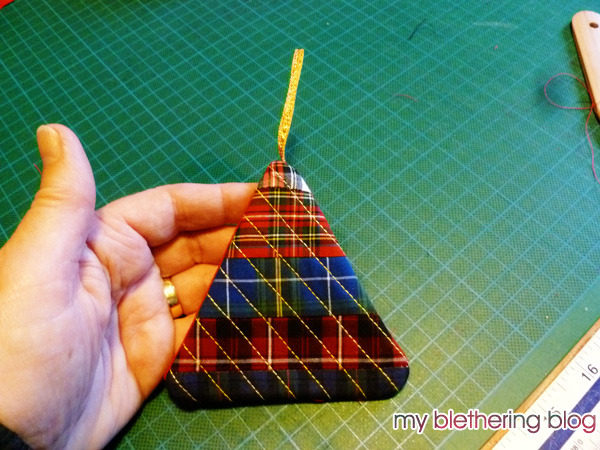 Last Friday, Douglas, Joanna and I headed to Glasgow. Joanna and I went to the Country Living Christmas Fayre and Douglas headed to the Science Museum. A good time was had by all. I didn't buy much but I did spend £1 to get this bag from the Scotsman newspaper stand. 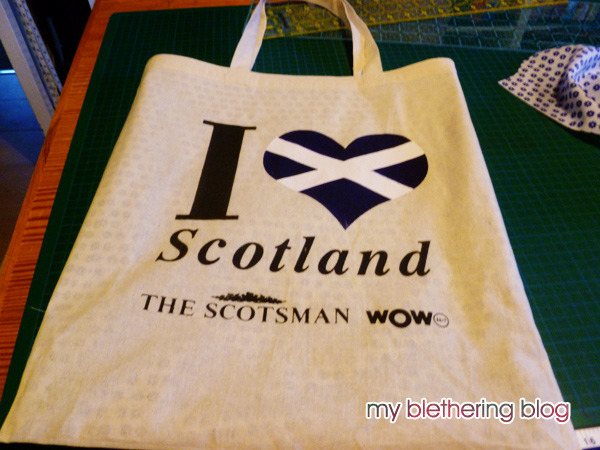 It also had some oaty snacks and a packet of quick porridge as well as the newspaper in the bag. The handles were too long for me so, when I got home, I shortened them and added a bag lining. Others may also have paid £1 for the bag but mine is now unique! 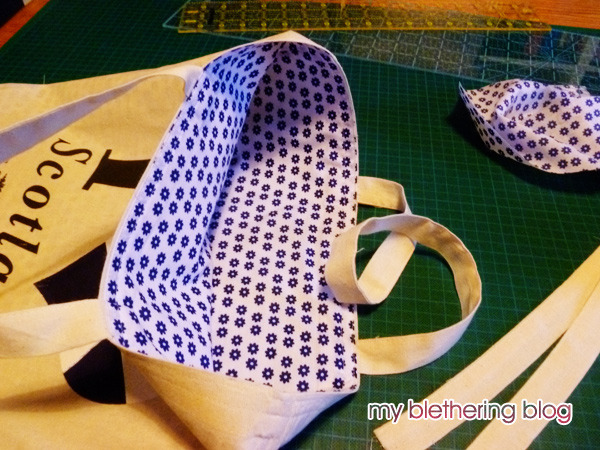 Joanna asked me to trace her next stichery for her. It's going to be awesome! 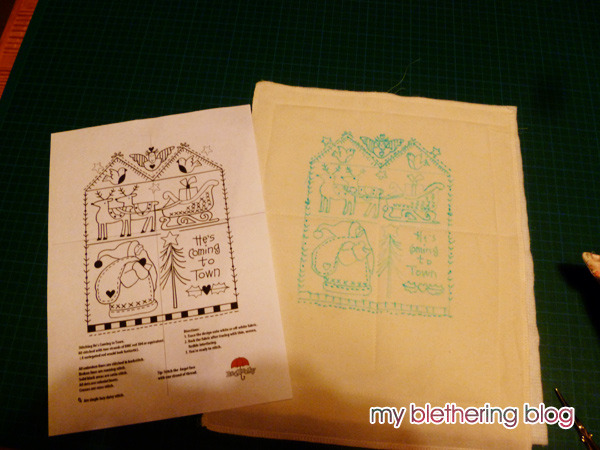 I took a notion to make myself a mini bow tie brooch to wear on my red jacket. 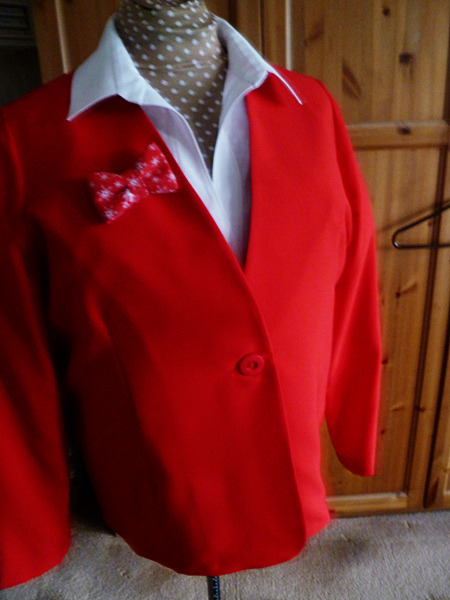 It was quite finicky to make it so I didn't really want to make one for all 14 of the ladies in our choir. I puzzled over it last weekend and tried a different method of making them and it worked so here are the 14 mini bow tie brooches all waiting to go to tomorrow's rehearsal. 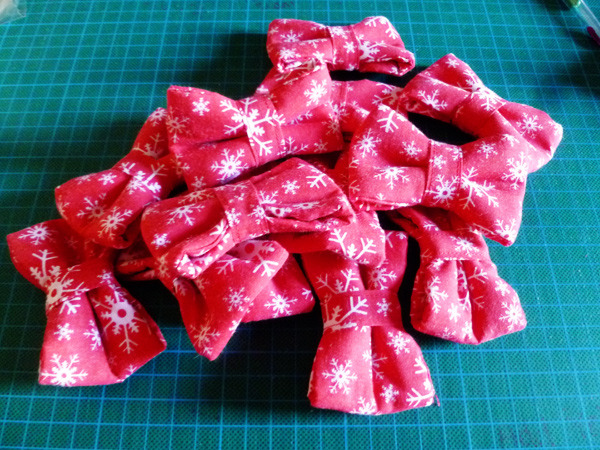 On Monday afternoon, Joanna and I headed to Stirling. We were going to a talk given by Diana Gabaldon - author of the Outlander series - and Neil Oliver - tv presenter with his first novel released. The talk was to be at Stirling Castle. I took this photo when we got to the car park. Isn't it fabulous? I love it so much, I've set it as my desktop picture on my computer! 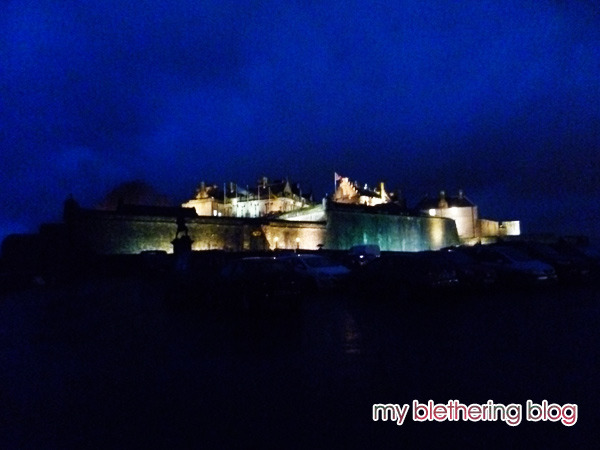 The talk was absolutely fascinating. Both authors had stories to tell and were very interesting. I was definitely glad we went. This is Joanna after getting Neil Oliver's autograph. 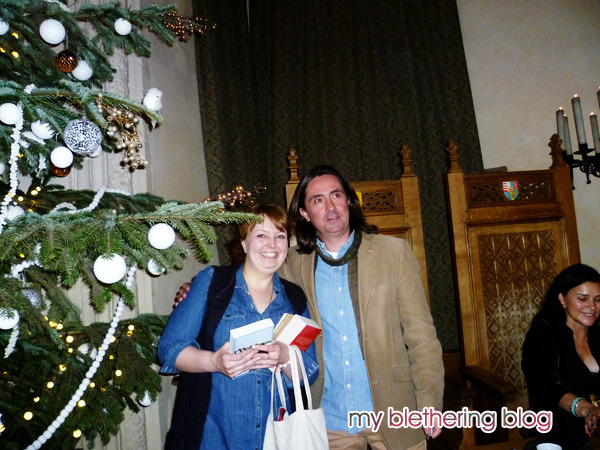 And here she is with Diana Gabaldon. Both authors must have had sore hands by the end of the night after signing all those books! 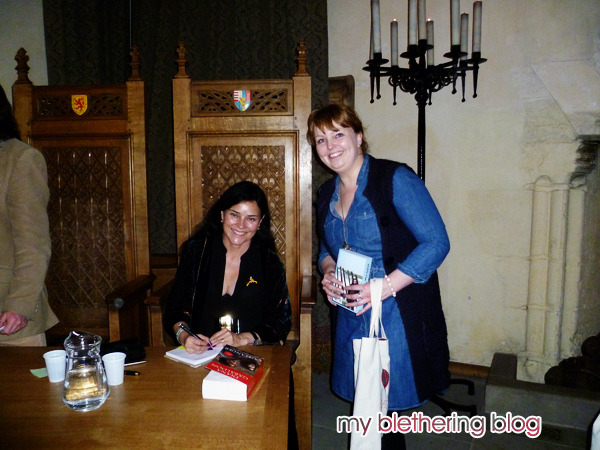 Joanna had asked me to make an Outlander bag for her to give to Diana Gabaldon but I made it a bit special. Nobody else has one like this!! 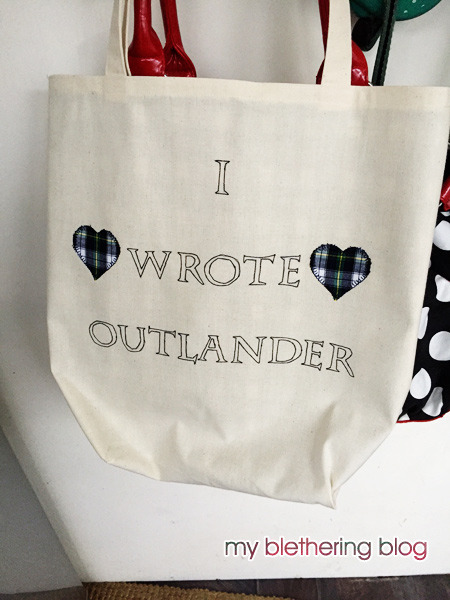 Okay, I think that's me caught up now. It's taken me more than 45 minutes to write this post. Lesson learned. Blog more often!!