Once again, thank you to you all for your kind comments on here and by e-mail on the loss of my Mum. The funeral was on Tuesday and, although sad, we laughed as well. Mum would be the first to tell us to get on with our lives so I've decided it's time to get back to blogging.

But what could I blog about? I decided to see what photos I had on my camera that I hadn't blogged about so here they are.

A couple of pairs of oven gloves for myself. 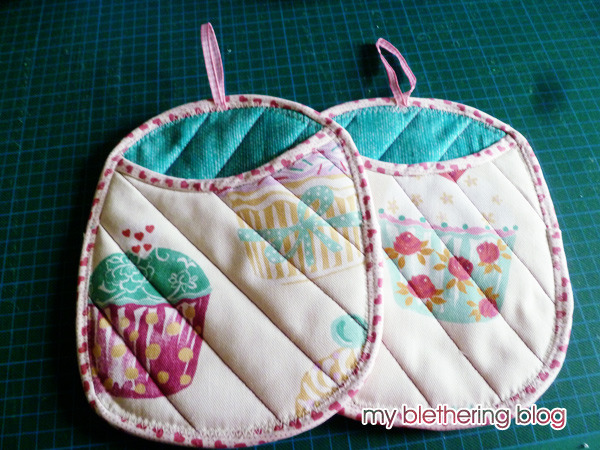 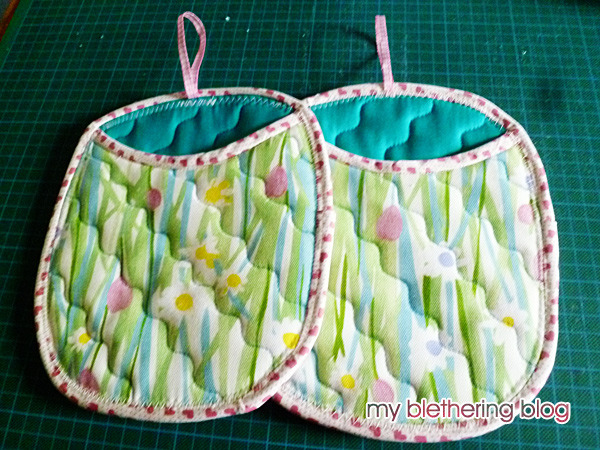 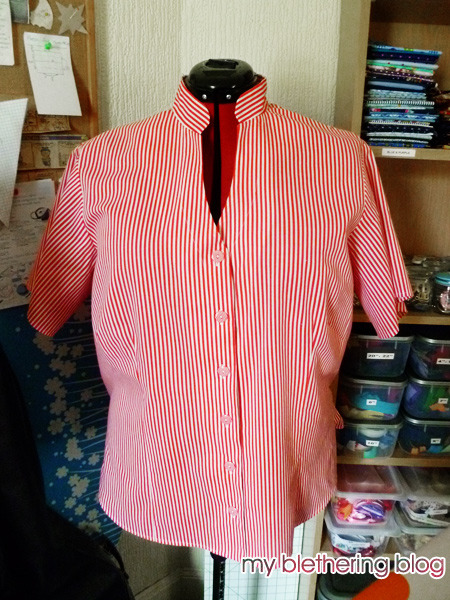 With some matching red stripey buttons: 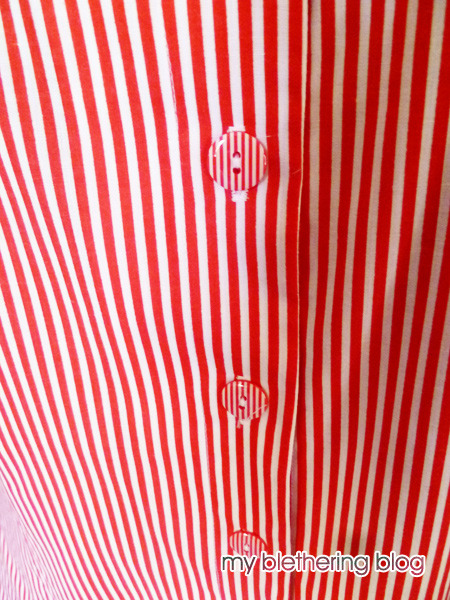 And then a story of a HUGE disppointment. I had decided I was going to make Joanna the "Walkaway Dress" (Butterick 4790) for her birthday. 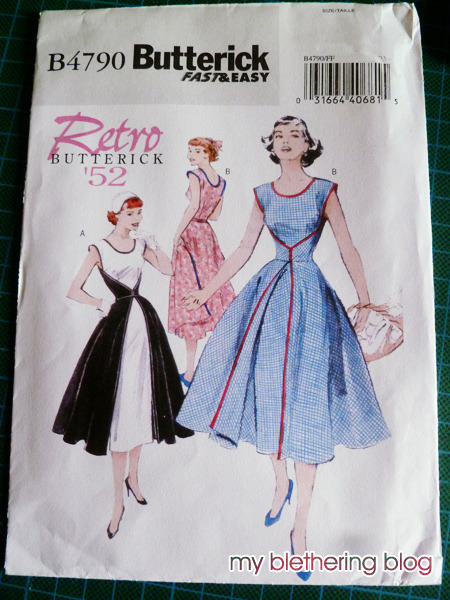 I duly purchased 5 metres of pretty navy fabric with red cherries on it. 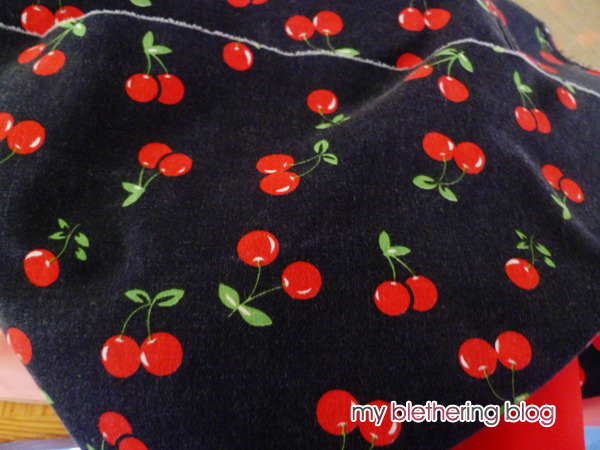 I washed it, dried it (outside on the line) and ironed it with the right sides together in preparation for cutting it out. 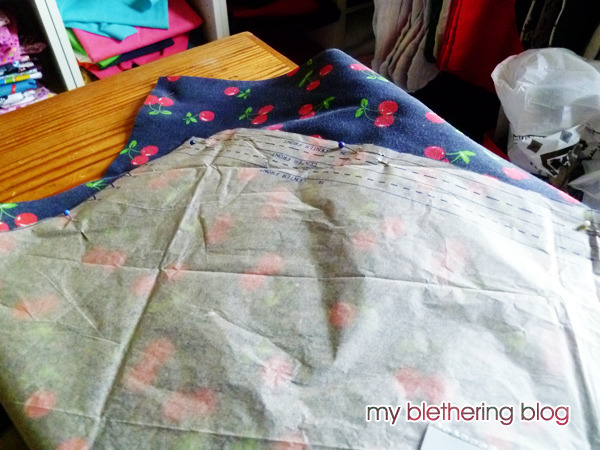 I needed red bias binding and, since my local fabric shop didn't have any in stock (!!) I had to make my own. I think I got about 10 metres of the stuff!! 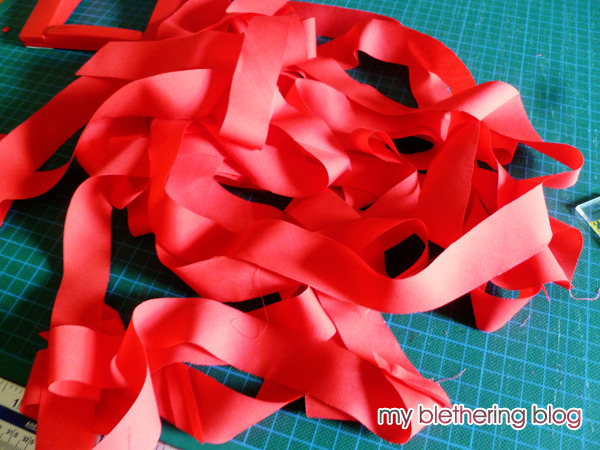 I duly made up the dress and was in the process of pinning all that bias binding on when I noticed the fabric had fade lines on it. I was so disappointed - and angry. I knew the fabric had faded in the wash but, when I looked closely, there were quite obvious lines all over the dress where the colour had faded more than the rest. I hadn't noticed earlier in the process because I'd turned the fabric right sides together and the fade lines didn't show up on the wrong side!

I took the dress to the fabric shop to show them and I was given my money back. Apparently, someone else had been in complaining of the same thing!! I was offered more fabric in its place but I just didn't know what I wanted to buy. To be honest, after all that effort sewing the dress, I just didn't want to have to start again. I asked what they would do with the dress and the assistant told me just to take it back home and use it for something else. So I did. I took it home and finished the dress. I thought Joanna could wear it to do her garden if nothing else!

I had told Joanna the story of the fabric so the dress was no longer a secret. I finished it off to the stage of just needing to add the front buttons where the backs come around to the front and gave it to her to try on. It didn't fit. The armholes gaped, the neck gaped, the waist was too tight, the lengths of the front and backs were different. Aaaaaargh!!

When Debbie was here a few days later, she tried the dress on. She has more in the boobage area than Joanna so we wanted to know if the armhole and neck gaping would still be there. It was. She did fill the dress out more than Joanna did but it didn't fit her either.

I don't have any photos of the dress finished. I was so angry at it that the fabric has now been assigned to the "I don't know what to do with this" bin in my sewing room where it will stay until I can be bothered dealing with it!

Oh well, at least the dress I did make for Joanna's birthday fitted her beautifully and the fabric was/is adorable. And not faded! 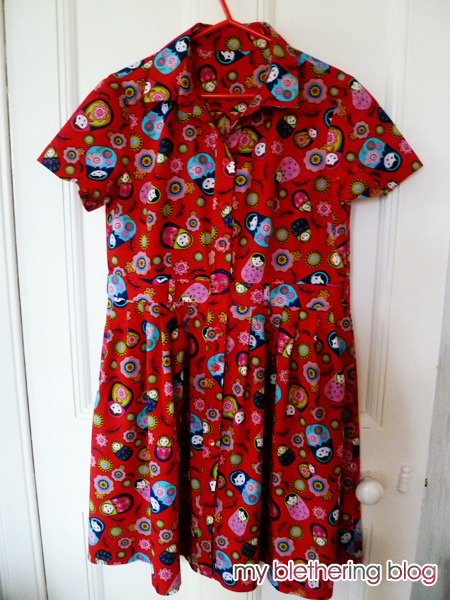