Last night, for tea, we had home-made leek and potato soup. There was enough left for me to have at lunchtime today so I decided to take a photo of it. 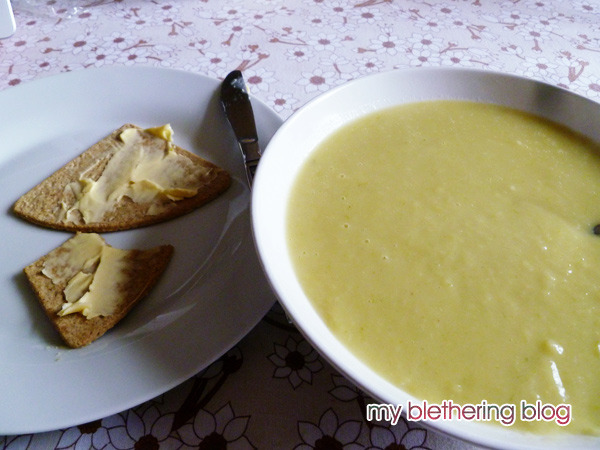 It tastes as good as it looks - even if I do say so myself.

I made the recipe up as I went along but am not claiming it to be an original. I'm sure others have done the same as I did and ended up with delicious soup too.

Anyway, here's what I did.

Melt some butter in a pan and add the chopped leeks, potatoes and onions.
Put the lid on the pan and leave the veg to sweat for about 10 minutes.
Dissolve the stock cubes in the boiling water and add to the pan to just cover the veg.
Add about 1 tsp of salt.
Bring to the boil and cook until the potatoes are soft - should be about 15 minutes.
Whizz with a hand blender or put it in a liquidiser.
If the soup is very thick, add more boiling water.