I've been busy sewing this week but can't show you any of it as they're all "blanks" for Christmas and the recipients read this blog and I don't want them to know what I've been doing.

What I can show is our banister. I saw this idea on Pinterest here and thought it was so much fun. So I dug out some wadding (batting) and pinned it around the banister then wrapped some tinsel around that and then added some toys.

I had tried adding some other toys but the banister is really steep and the toys which weren't sitting upright looked like they were going nose first down a very slippery slope! LOL

I had a wee helper who was watching me intently as I added the toys. 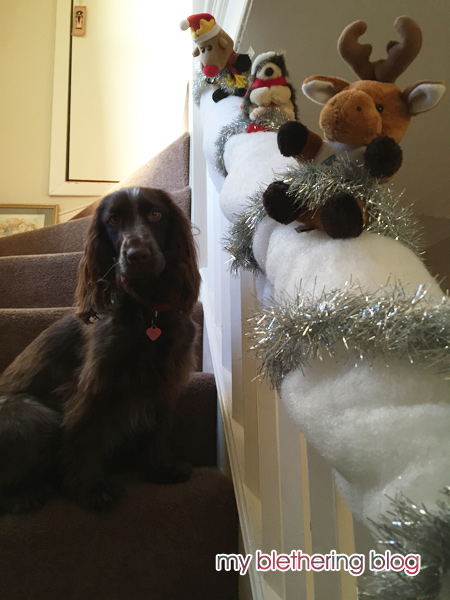 I suspect that I'll need to keep an eye on her or she'll have those toys down from there. In fact, now that I look a bit more closely at the top reindeer, he looks decidedly closer to the edge of the banister than he was when I fixed him on. I wonder who did that? Tilly?? Was that you? Don't try to deny it!! :oD