a moment of madness

In a moment of madness this morning, I suggested to Douglas that we might move our dining room around a wee bit so that he could have a desk in it for doing his work on. (He works from home.) The idea took root and, a bit like Jack's beanstalk, took off like a bat out of hell. I think I've got my metaphors mixed up there but I'm sure you understand.

Anyway, a bookcase needed to be shifted so, of course, all the books had to be emptied out of said bookcase and then the bookcase moved and the books put back in - haphazardly for now. The sideboard needed to be moved over by about 12" so my happy shelves had to get taken off in case they fell down so all that stuff is sitting untidily on another cabinet. (I thought I had a photo of my happy shelf but the one I have only shows about a third of the things that sit on it now. If you want to see that photo, it's in the first of these posts and the other posts on that page show some of the additions to those shelves.) The dining room table is buried under stuff and every chair at the table is weighed down with even more stuff.

I'm really hoping that order will come out of all this chaos really quickly - ie tomorrow - but I think I might be being a bit hopeful. I keep telling myself it's my own fault that the place is a tip as it was my idea in the first place. Serves me right! :oD

So, because no sewing got done at all today - I don't think I even set foot in the sewing room!! - here are a couple of photos just to brighten this blog post up a wee bit. First of all the wee owls I made which I forgot to show at the time: 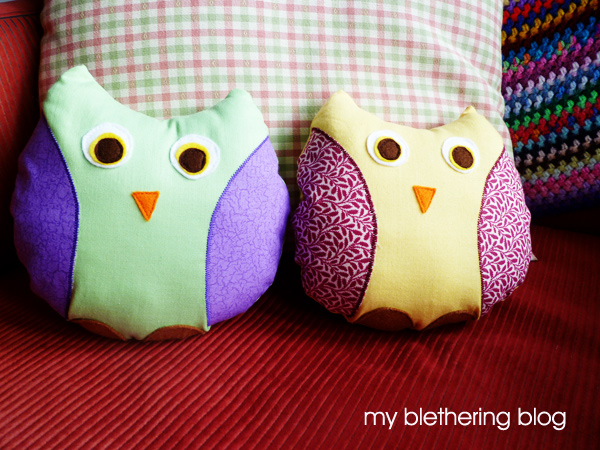 And my bargain of the month. I had bought some Anchor Pearl Cotton thread for quilting in a craft shop a few weeks ago and paid £2.20 for each 10g/85m spool. I had thought I'd get quite a few colours but not at that price so I only bought red and green. I decided to see if I could get some online for less money and, sure enough, I found 50 of the exact same thread on e-bay for £16.99 + £5.99 postage. So my e-bay threads cost me just less than 46p each - a much better price! And the colours are wonderful. A great bargain! :o) 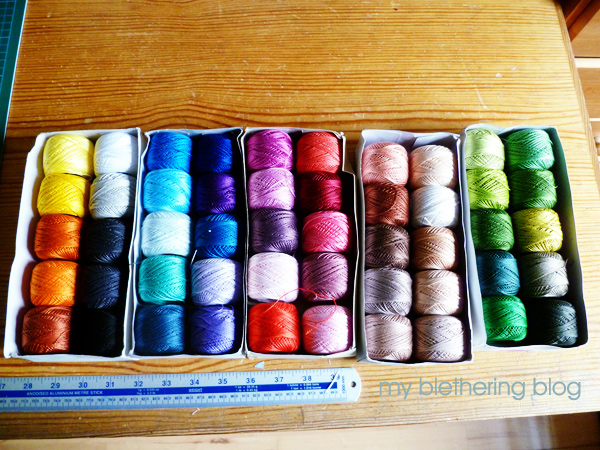