This is what the back garden looks like today. Yes, it's sunny but there's no warmth in the sun so it's not going to melt any of that stuff! 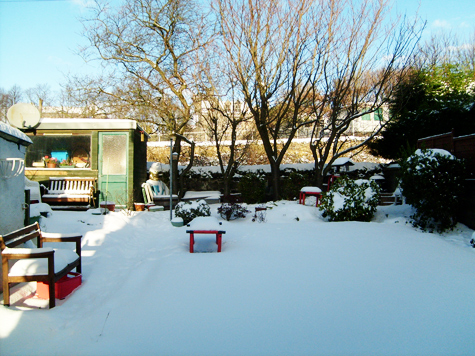 I would guess that the snow is anything from 12" - 15" deep in places. Rosie - whose tummy is not 12" to 15" up off the ground - doesn't like it out there. She does go out in it and seems to stay out for longer than necessary to do the needful but she doesn't like it when she comes in and has wee snowballs stuck to her paws, legs and tummy. Poor wee Rosie!

Because the snow has been bad all over, our Singers' Christmas concert, due to be held tomorrow evening has been cancelled. There was no way it would have been safe - or even possible - to get all 22 members of the choir to the church for the rehearsal tonight and the concert tomorrow. And, to be honest, I think, even if we had made it, we wouldn't have had an audience. It's bad enough walking in the snow in the daylight but at night when the temperatures drop even further - madness!

So all that bother I went to to make my bling waistcoat and I don't even get the chance to wear it. Och well, I'll wear it on Christmas Day and be blingier (!) than any of the decorations! LOL