We don't usually hang on to snow as long as this - the salty air from the River Forth usually stops the snow from lying around too long. Not this week.

Here's what our back garden looked like this morning: 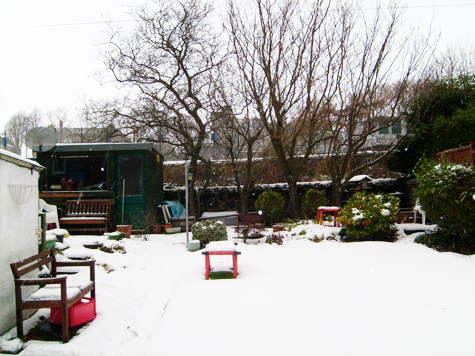 And this is the view of the street from the front door. 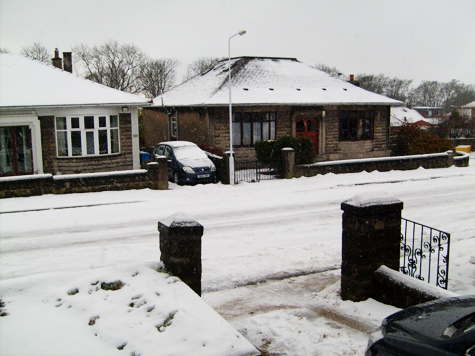 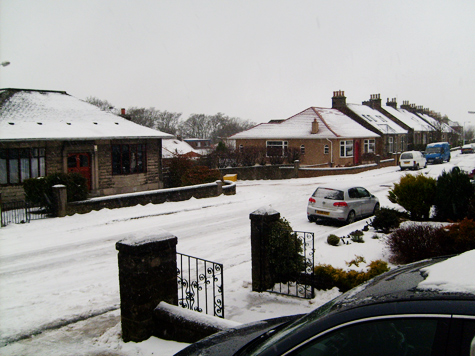 Tomorrow I have to go to the hairdresser's for a haircut. I'm going to walk because there is no way I'm driving in that muck.

Then, on Thursday, we have the last rehearsal for the Singers concert on Friday. If the snow doesn't go away before then, I wouldn't be in the least surprised if the rehearsal - and the concert - have to be cancelled! Only time will tell.

This was the view from the back door earlier today. Aaaaargh!

Here's what our back garden looks like this morning. Brrrrrrrrrrr! 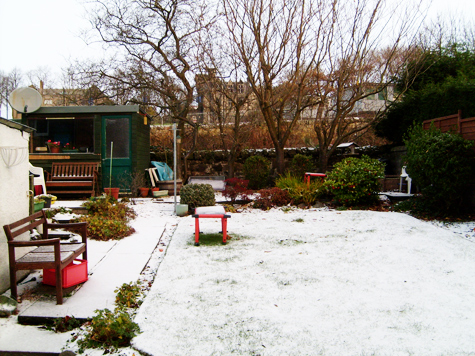 Rosie wasn't too sure about this white stuff! 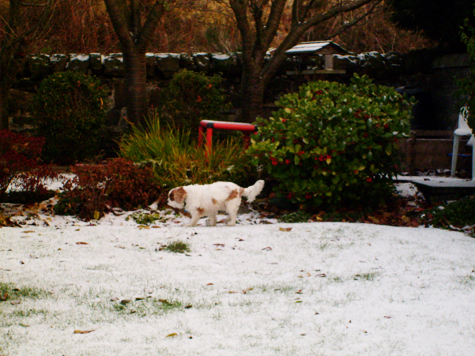 We got back from York on Wednesday evening. We had a great time - photos will be posted after I've gone through them to decide which to post.

On the way back in the train, we couldn't see much - it was dark - but what we did see was an amazing amount of snow falling in Newcastle.

It hasn't arrived here - yet - but according to the BBC, we're due for some snow tonight. Yikes! 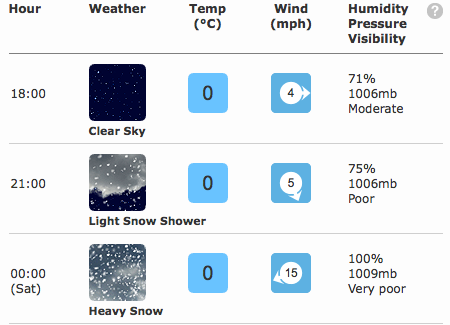 Joanna and I are heading for York tomorrow. We are so excited, we're like a couple of kids waiting for Santa! :oD

We're going by train which is even more exciting. We've never been on this train route before - at least as far as we can remember - so that should be interesting in itself! By looking at the map, it looks like we follow the east coast for a lot of the route - wow! I hope the train's windows are clean so we can see out!

We'll be back on Wednesday evening by which time I think we'll be exhausted from all the walking and sight-seeing and shopping and eating out and having full English breakfasts and just generally having a good time! (My keyboard typed "having a food time"! I wonder if it's trying to tell me something! LOL)

I finished the waistcoat that has been giving me fits since I started it. Since before I started it, if the truth be known!

The first problem started when I bought a new waistcoat pattern. The ones I had were a couple of sizes too small. Well, they are more than 10 years old so no real surprise there!

As the material I was going to use was a bit expensive, I decided to make the pattern up with some calico to make sure it would fit. It's a good job I did because it didn't fit. It was too small. By a mile!

Now, according to the pattern envelope, I had made the correct size for me so what the heck was going on? I dug out my old patterns for the waistcoats I wore all the time in the 90s and, would you believe it, the finished size of the size I used to make was 1" bigger than the finished size of the new pattern. 2 sizes bigger was actually smaller than the old size! What??

I checked the other 2 old faithful patterns and, sure enough, both of those were also more generous in their measurements than the new pattern. I was soooooo annoyed. I had paid good money for a pattern which I didn't need because my old ones would do me fine.

After I got over that annoyance, I cut out one of my old faves in calico because, again, I wanted to make sure it would fit before I cut out the material I was going to use. It fitted me fine. So maybe I'm 2 sizes smaller than I think I am? Mmmmmm.

I then cut out my material and the lining and pinned it together. I wondered if I'd have problems with the material as it had a stretch to it. Because of that, I decided to use my walking foot to sew it all together.

Didn't work. The fabric still moved as I sewed. So, I did something I have never, in all my years of sewing, done before. I tacked (basted) the whole thing.

Back to the sewing machine and aaaargh! Even with it all tacked together, the fabric still wanted to move. I had to unpick things several times but I finally got it sewn together.

So that's the l-o-n-g story of the waistcoat. Now here are the photos. 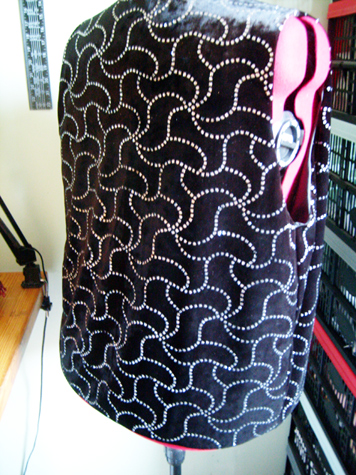 I've finally finished the lap blankie I've been making for my MIL's Christmas. 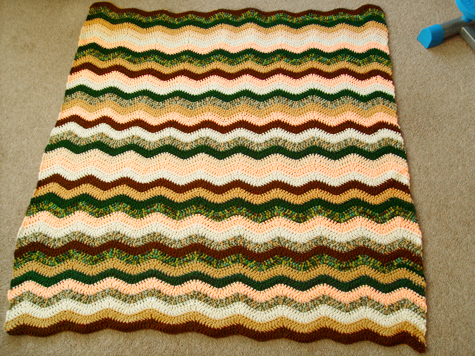 It's done in double knitting acrylic and will be very cosy draped over knees. I know this because it's been keeping me rare and cosy whilst I've been making it.

My next crochet project is going to be something made with granny squares. Probably baby blankies for Joanna to take to her work. (She works for a charity for single parents and some of them need everything for their babies.)

As for the waistcoat that was giving me jip last week - I've changed the pattern to one I already had and had made many years ago. I've made a few adjustments and, so far, it looks like it will work fine. I've got the pieces cut out and ready to sew. Hopefully I'll get that done this week. :o)
2 comments:

It's taken me longer than I'd hoped but I've finally finished Joanna's 12 Days of Christmas wallhanging. I'm fairly sure she bought the panel sometime last year so I'm a year late in getting it made but better late than never!

Here's how it looks in full - 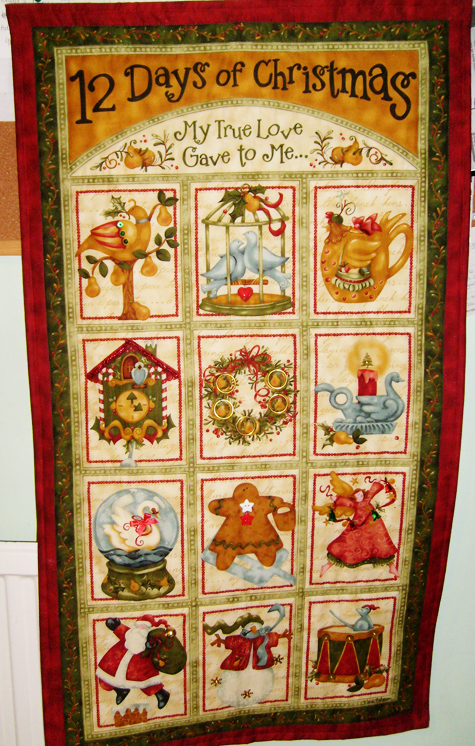 It's not really clear that I added embellishments to each day so I hope you can see them more clearly in these 2 photos. 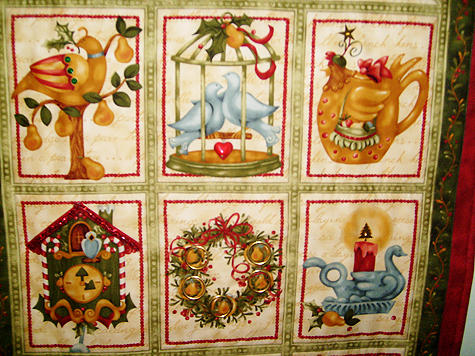 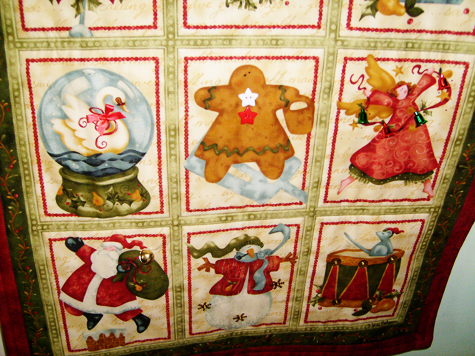 Day 1 - 3 green sequins on the partridge in the pear tree
Day 2 - a wee heart hanging below the cage with the 2 turtle doves
Day 3 - a star on the feather in the hat of the French hen
Day 4 - red shiny pipecleaner on the roof of the clock showing a 4 o'clock calling bird
Day 5 - 5 gold rings
Day 6 - a wee gold christmas tree sequin for the flame of the candle of the goose-a-laying candlestick
Day 7 - a bow around the neck of the swan-a-swimming
Day 8 - 2 buttons on the gingerbread maid-a-milking
Day 9 - 4 wee bells on the garland held by the lady dancing
Day 10 - a bell on the Santa hat of the lord-a-leaping
Day 11 - some snowflakes on the snowman with the pipe (pipers piping!)
Day 12 - a few gold sequins on the drum of the drummer drumming

What's next? I'm fighting with a pattern of a waistcoat which I bought last week. I'll tell that story if when I win the fight!
3 comments:

Our clocks went back yesterday and it's now so dark so early. I had to close the curtains way before teatime tonight. Blech!

That has to be the worst thing about winter - the darkness. Oh the weather can be blech and the cold can get you down but the darkness is just awful.